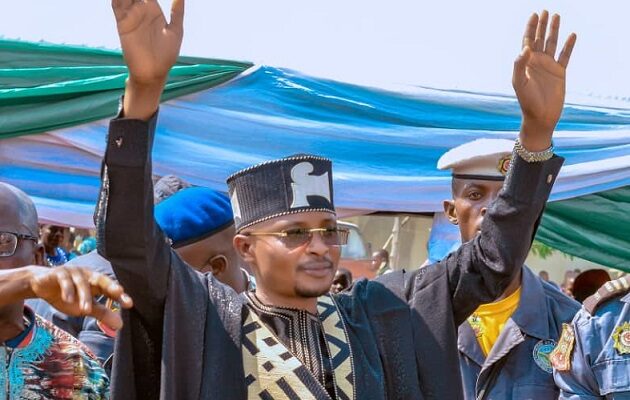 The Yagba Vanguard for Equity and Development has berated the media team of the Peoples Democratic Party (PDP) for being shameless and retrogressive.

The PDP had earlier, in a statement signed by Dr. Oluwasegun Gbenga, condemned the member representing Yagba federal constituency at the House of Representatives, Leke Abejide, for ordering the police officer attached to him to attack youths that flagged him down while returning from his country home during the festive period.

In a counter statement titled “Who is afraid of Elder Leke Abejide”?, the Organizing Secretary of the youth group, Wasiu Elesho, condemned the media team of the Presidential Campaign Council in Yagba Federal Constituency for attempting to downplay the successes recorded by the lawmaker.

“About two days ago, we saw a media show of shame by a group, whose only semblance of nomenclature was that they are the media wing of Yagba PDP. The tone of the letter was jellied to downplay the achievements of an enigma that is representing our federal constituency at the Federal House of Representatives, Rt Hon. Elder Leke Abejide.

“The show of shame started by questioning the achievements of the enigmatic legislator as well as try to belittle his avalanche of contributions to the socio-economic and infrastructural development of the people of Yagba land.

“We will be scientific in addressing some of the issues raised, without validating the lengthy senselessness as captured in the self-indicting attack.

“Going scientific, let us look at the analysis of the achievements of both, after four years at the Green Chambers.

“Prior to his election in 2003, Hon. T.J. Faniyi helped a few students to pay their WAEC registration fees. He did that for a few years and was well appreciated by the beneficiaries.

“In the case of Elder Leke Abejide, he has consistently paid all the WAEC fees for all Yagba students, distinguishing himself from the gesture of Hon. Faniyi. Hon. Leke Abejide decided to take that burden off the parents of the students, even before going to the House of Reps. Today, he has not only sustained the tempo, but also extended the gesture to other Federal Constituencies in the Kogi West Senatorial District.
On that, Leke Abejide is miles ahead of Hon. Faniyi.

“Elder Leke Abejide is miles ahead. Through his Grassroots Agricultural Empowerment Program, many people at the grassroots have been empowered. He has also supported entrepreneurship development with hundreds of millions, raising new grassroots economic champions who are now employers rather than looking for jobs.

“The massive support Elder Leke Abejide is receiving today is because the people in villages and hamlets see him as the new economic Messiah who has used his personal resource to change lives. He didn’t come from nothing. He was an employer of labour before he went to the Green Chambers and his achievements have ruffled the feathers of those who never did anything or not planning to do anything for the people.

“Talking about traditional institution, before now, many traditional rulers could not attend meetings and functions because of lack of transport means. Some had resorted to riding on bikes to functions.
Elder Leke Abejide found that embarrassing eyesore unacceptably and decided to put his money where his mouth is by procuring SUV for royal fathers across Yagbaland. The magnitude of the gesture is unprecedented in the annals of Yagba history.

“It is not a surprise that the Royal Fathers across Yagba see Elder Leke Abejide as a God-sent who has whipped away their shame and anguish. He has shown tremendous respect to them and an unquestionable commitment to their welfare and wellbeing.

“One of the many memorable social spots of the Leke Abejide era is the care for windows across the three Local Government Areas that make up the Yagba Federal Constituency. For years, he has periodically devoted stupendous resources to putting smiles on widows across Yagba by provision of foodstuffs, clothings and working tools. The God who mandated the rich to take care of the Widows will never abandon Leke Abejide.

“Annually, the legislator has done mega empowerment to give back to the people. He has given economic seeds to people to expand, including motor vehicles for transport business, motorcycles, sewing machines for fashion designers, dryers for saloon operators and many others.

“Even the Holy Books told us that whatever we sow is what we are entitled to reap. Leke Abejide will reap massive endorsements for re-election by the grace of God,” the statement read.

The group called on Abejide not to dance to the distractive beat of the failures who think the Yagba people will reinforce their failure.

“They are jittery and embarrassed by the great support received by the best representative of Yagba people ever. Elder Leke Abejide should ignore them and continue his good work. We won’t replace a resounding success with a shameless failure.

“Elder Leke Abejide is not in this contest as an individual. The people of Yagba are more than ready to continue to support him. He has proven that he is a responsive representative of the people.

“The PDP must rein in their faceless attackers as no amount of blackmail and mudslinging will make Yagba people lose focus.

“For the roads he has constructed, for the thousands he has helped to realize their educational dreams, for the water he has provided, for the healthcare he has enhanced, for the youth and women he has empowered, for the Royal Fathers he has blessed and many others; the good people of Yagba will overwhelmingly reelect Elder Leke Abejide. We won’t bring back the originators of the grassroots oppression.