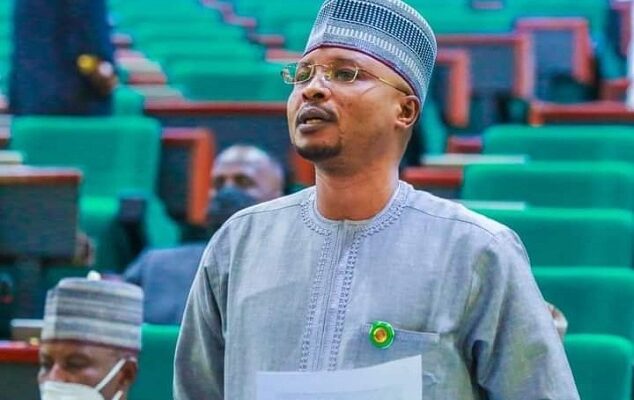 For Leke Abejide to describe a party’s media team as faceless shows he is insincere, ignorant and further explain why he has failed at his duties as a representative.

No wonder he ran the office of a Representative like his personal farm and he walks around pretending to be busy and unable to render his stewardship to the good people of Yagba federal constituency for four years.

We are also aware that, his pained outburst is a cheap attempt to distract the people from his new toga of brutality as exhibited in Ife-Olukotun recently and to escape the many unanswered questions asked by the people he represents. He failed woefully to change the narrative.

It is sad though, that a man who managed through an evening class described a group of intellectuals as uneducated.

It is bad enough that he can’t not manage his anger, so much that he hurled insults, laced with arrogance, engaging the gear of panic attack rather than seize the opportunity of being reprimanded to answer the plenty unanswered questions asked by the constituents.

Leke left no one in doubt that almost four year in the house of representatives, he is yet to learn and still behaves like a toddler, describing money voted for a constituency projects as his personal money brought about from his personal efforts.

It is crystal clear too that he suffers from inferiority complex which has greatly affected his ability to think matters through and clearly arrive at a reasonably sound position.

In a statement signed by Dr. Olugbenga Segun, the Press Release says, “if Leke admits that he gets N113m ZIP fund once in a year, it means he has gotten N452m this far…

Is it wrong to ask him to explain what he spent this monies on?

Is it also wrong to ask what he has done with the eight million naira (N8m) every month for 43 months, which stands at N344m so far?

Is it wrong to ask him to render a report to the good people of Yagba?”

What special projects has he carried out that others before him did not do?

Those before him did not even get the kind of funds he got, yet did well in their Constituencies.

Has Leke forgotten that, we know that monies are being domiciled in agencies for members to draw through contractors that will execute the jobs? Or does he think there is anything hidden under the sun? We will also like to ask why he bought a grader for $115,000 dollars and he is yet to pay for it, and who owns the grader he used our money to buy? instead of giving the job to FERMA or other capable contractors to do?

Do we need to inform him that many  individuals in Oke Oyi, Isanlu, Odo Ere and so have self fixed roads around their areas?

It is also important to note that, Leke Abejide is a serial liar for claiming that apart from N113m, he is not suppose to come home with anything. Does Constituency Office running cost translate to his personal money? When does the Sesame farmers’ N320m intervention fund become Abejide’s personal emolument?

We are aware that Leke Abejide went on on Channels tv live,  precisely on thursday, the 16th of June, 2022, to tell the world that his salary is only six hundred and ninety seven thousand naira (N697,000) per month and the rest is for his Constituency. We are now asking him to explain what he has done or he is doing with the said eight million naira he takes home monthly and other, a supposed simple task for a profitable ambassador.

Leke’s childishly behavior, his quick switch to hurling insults at every turn is appalling. Yet he is quick to go quoting the Bible. This reminds one of the false prophet of the end times, who knows the Bible more than the devil.

That same Galatians 6.7 he quotes, will be his albatross, as it aptly describes him as an ungrateful soul, who has bitten the fingers that fed him and embarked on deceits.

The fact that his party is a one man show, that has no team is why he is referring to a party’s media team as faceless, and little wonder he stoops so low to be writing those embarrassing lies in person. Though one of our greatest strength to drag him out.

That Leke Abejide is asking what PDP’s candidate in 2023 election for Rep has done, only exposed him as a marauder, mischievous character, showing that he is an interloper that knows nothing about the history of Yagba people.

However, we understand that as an opportunist, who benefited from the unsettled rift within the PDP in 2019, where most people members worked with him to emerge, he wouldn’t understand that he was not the first person to be in the house and he has so far performed the least of all of them thus far. As he lacks the basics requisite of human relations, dressed in borrowed garb of pride with no values.

If Leke Abejide is deaf, the person he used the people’s money to send his child overseas should join the ones he abused his position as Chairman House Committee on Customs to divert impounded vehicles to, should use the sign language  to tell him how the PDP got federal jobs for Yagba sons and daughters at Federal level in the past using same office he is holding now, paid full WAEC fees, helped restored about five of our sons back to there services after they were wrongfully dismissed from service, kept our roads motorable by FERMA intervention through out his stay and that of those before him and the Aro and Karimi after him.

We are also aware that all those sewing machines, motorcycles and other grinding machines were from the National Productivity Centre, which was and still the practice to empower the people and not from any personal proceed or even Constituency fund, and he had come lying that he used his money to procure them.

Leke should be reminded that PDP, even in opposition, is still a national party and not his hand-pocket-ADC that is a leech on the PDP and now a parasite on an APC faction. And to have an illusion of winning election this term, just as he dreams that, what PDP did for him in 2019 will be repeated by the faction of APC-ADC unholy marriage is a tall dream.

The PDP is not a parasite and survives alone any day. It is a dehydrated sign that despite the fact that the ADC has a presidential candidate, Leke has chosen to be an errand boy to other political party, playing _amulumala_ politics.

Angry Leke Abejide, should be advised to calm down as his overblown ego is being deflated in phases. We know he is shocked that we had waited this long to puncture his lies about WAEC, which he just as usual lied again that he pays all monies including administrative fees, while his half baked media handler says he pays eighteen thousand naira (N18,000) another says he paid eighteen thousand naira plus one thousand two hundred naira (N19,200) and leaves the rest for the pupils, still leaving us in more doubts about which to believe.

We will remind him again and again, that the PDP paid full and left the parents with nothing to pay, unlike him, who even made the world thinks he is the first to start paying WAEC/NECO, since he has nothing else to show.

A feat Hon. Salaudeen Ganiyu, popularly known as ‘Erukutu’ did as a Local Government Chairman.

As much as we sympatize with Leke on his deflated WAEC lies, we can’t help but ask for what happened to the N2.9b in FERMA and others listed earlier.

We are the people who the money is meant to fix our roads in Yagba, the first N1.5b and the newly released N1.4b from supplementary budget and we are not happy seeing him using sand to feel the potholes, where other Nigerians and even foreigners plies.

We are asking him why he didn’t construct the Ilu Agba to Egbe road under 50 days that he promised way back, we want to know.

Is Leke Abejide the brutal lord saying no money is allocated to Yagba Federal Constituency in the budget under FERMA? The same FERMA in Ejiba was facilitated by the PDP’s candidate for 2023 House of Reps. We want to make it categorically clear that other members of the Federal House of Reps like PDP’s candidate in 2023 are getting jobs for our people, is Leke Abejide selling the slots given to him for our people? Or he is not qualified for any? If yes, how much is he selling the slots or what contract did he bargained them with? And if no, why is he unable to attract employement like others?

We like to know why others are able to do this and he is unable to.

The PDP in Yagba is interested in knowing why the short fused rep thinks whatever,  money in that office is meant for him. Does it mean Leke does not know the difference between a public office and a private funds? Even novices know the difference! Stack illiterates do too.

We advice him to seek knowledge where he lacks one as the Bible directs.

We like to also remind him of his earlier failed proposed N5m elephant projects per community, the one he asked people to get feasibility studies for and which the communities have since made submissions. Where are the projects?

As much as we love to make it this purely an issue driven piece, his crude and narrow minded response called for this equal proportional response, but laced with verifiable facts that he should respond to.

If he continues to insult us, we will not spare him, he would even hear and get worse words from us, as we warn him seriously to desist from his foul languages and to respond to issues raised as the elected representative, who sadly has gone gaga unleashing brutality on the people as if he is an emperor.

Leke Abejide is asking what our candidate wants to go and do there after twenty (20) years and we dare ask him, is it unconstitutional to seek reelection?

We know Leke is a bad student of history but we want to ask him what Gbajabiamila, the Speaker of the Federal House of Representatives, his current  boss still doing there since 1999?

Let us quickly add that, we are sending T.J back to correct the legislative anomalies Leke brought since 2019. To restore sanity to that sacred Yagba Rep seat he has desecrated; get the people to continue to get more federal jobs for our teeming youths as he did before and among others, get more contracts for our people, keep our roads maintained as handled by FERMA and not using sand like Leke is doing to cover potholes and gullies, so we can stop him from continuing to endanger the lives of road users via accidents and health issues.

It is indeed an embarrassment that even as we talk, Leke Abejide is yet to move just one single responsible bill in the green chamber. This is with now known traceable reasons as found in his is so called failed diversionary  response.

…and for God sake, how will this kind of person with many leadership challenges be able to successfully move bills to law?