Home News We Own Obajana Cement 100% – Dangote to Kogi Governor 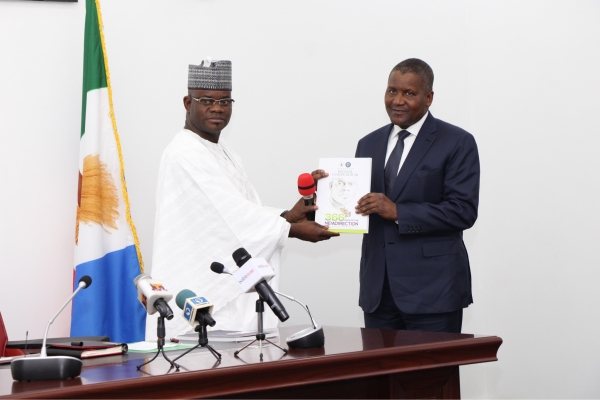 We Own Obajana Cement 100% – Dangote to Kogi Governor

The management of Dangote Cement Plc. has firmly declared that the Obajana Cement plant in Kogi State is owned 100 per cent by it and that the invasion of the plant last Wednesday by armed vigilantes “on the orders of the state government” was illegal.

This was made known in a statement signed by the Group Managing Director (GMD) of Dangote Cement Plc, Michel Puchercos.

The statement berated the attack on its cement plant by government agents.

Puchercos said: “The Management of Dangote Cement Plc. wishes to inform members of the public, especially its customers and other stakeholders of the recent invasion of its Obajana Cement Plant, Kogi State by armed vigilantes on the orders of the state government.

“The vigilantes, led by some officials of the State government were apparently acting on a resolution of the Kogi State House of Assembly on controversial tax claims; claims that the state governor had also contradicted when he said the shutdown was due to an alleged invalid acquisition of the company by Dangote Industries Limited.”

He said in the process of forcefully evicting the company’s workers, to enforce the illegal shutdown, the vigilantes shot at 27 of the workers and also destroyed some of the company’s property at the plant.

“We have taken steps to get the hoodlums apprehended by the law enforcement agencies, and we will ensure that full legal action is taken against them.

“We therefore appeal to all our staff and our esteemed customers to remain calm while we explore all possible legal steps to address the situation. The welfare of our staff remains our key focus as we work hard to minimize further impact on our people and operations.

“While we reiterate that Obajana Cement plant is 100% owned by Dangote Cement PLC, we remain resolute in transforming Africa, while creating sustainable value for our people, communities, investors and customers.”