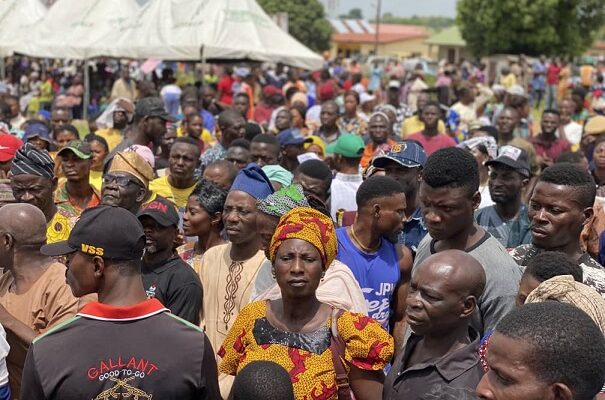 We Are Tired of ‘Egbe Elebi’: Abejide Receive 8,000 Defectors Into ADC in Yagba Federal Constituency

A chieftain of the ADC, Mr Bode Kayode announced to the gathering that over 8000 new members recently joined the party in the area and have been issued with their membership cards.

At the crowded occasion held at Itedo-Makutu, Isanlu organised to receive defectors from the All Progressives Congress (APC) and Peoples Democratic Party (PDP) in the three local governments of Yagba West, Yagba East and Mopamuro.

Hon Nike Akolade, formerly women leader of APC in Ere Ward, Yagba West LGA who spoke on behalf of the defectors said they are tired of ‘Egbe Elebi’ (party of hunger).

She said the mass movement to the ADC was motivated by lack of good governance by the ruling APC, hunger and the unprecedented performance of Hon Leke Abejide, leader of the ADC and member of House of Representatives for Yagba Federal Constituency.

Akolade went further to introduce the defectors one after the other, including women and youth leaders hitherto holding APC offices at the various electoral wards.

In his remarks, Hon Abejide, visibly elated and “flabbergasted” described the mass turnout at the occasion as unprecedented “lock down” of Yagbaland in favour of one political party that is not in control of government, never before witnessed in Yagba history.

“We have seen now that Yagba is now locked down for African Democratic Congress. Yagba has now turned to a one- party federeal constituency. Are you happy with what I am doing? (crowd reply: a thunderous “yes!!”). I know you are all willing to vote for me but one more thing I want to beg you to do for me in Yagba is to cast your votes for the three ADC House of Assembly candidates in Yagba West, Yagba East and Mopamuro. You will never regret you did. What you have seen is a tip of the iceberg. ADC will do more and more. If you want to vote for ADC say ‘aye’, if No, say ‘Nay’. The ”Aye’ has it” he added, approvingly.

He disclosed that he had made provision for 50,000 ADC membership cards and would be willing to increase the number to 100,000 in the days to come.

Among speakers at the occasion were ADC Governorship candidate in Kogi State in the 2019 election, Barrister Justina Abanida, House of Assembly flagbearers for Yagba East and Mopamuro State Constituencies, Hon Soji Odofin and Hon Oyebode Makinde as well as representatives of Tiv, Igbo, Hausa and Ebira communities from the 34 electoral wards in Yagba Federal Constituency.