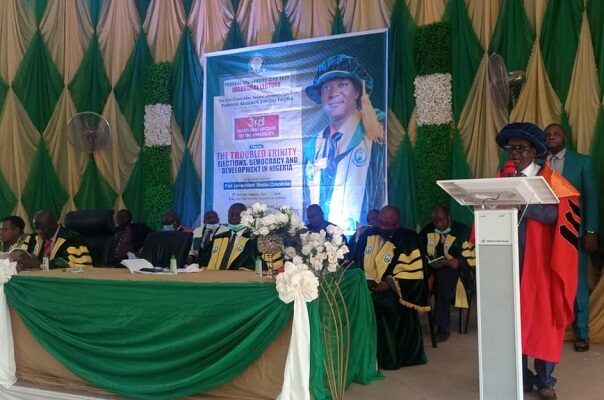 Professor Omotola stated this during the 3rd inaugural lecture of the University with the theme “The Troubled Trinity: Elections, Democracy and Development in Nigeria.”

He said Nigeria’s democracy is weak due to want he called poor elections from 1999 till date, adding that gross domestic product (GDP) is not a yardstick for measuring development but a transparent electoral process.

The Deputy Vice Chancellor said godfatherism, falsification of results, money bag politics, electoral violence, defections, among others have marred the electoral system of the country which he noted are alien to democracy.

He maintained that poor elections will always bring about weak democracy if transparency, equity and fairness are not considered by political parties and the electoral umpire.

“The quality of our elections in Nigeria is a little bit above average and there can be no democracy where there is no free, fair and credible elections.

“One problem of elections in Nigeria is that politics is influencing judiciary and the judiciary is also influencing politics with conflicting judgements,” he said.

He noted that the internal affairs of political parties are not democratic, saying their ideals are not well declared.

Prof. Omotola pointed out that for democracy to thrive in Nigeria, both majorities and minorities must be given a sense of belonging in the scheme of things, noting that the legislature have not been able to live up to expectation in terms of legislations that will strengthen democracy and oversight.

Moved by the brilliant delivery of the lecture, Vice-Chancellor of the Federal University, Oye-Ekiti (FUOYE), Prof. Abayomi Fasina announced Prof. Omotola as the “Professor of Comparative Politics of the University”

The lecture was well attended by the management, staff and students of the institution, traditional rulers from Kogi State including Olujumu of Ijumu Kingdom, Oba Williams Olusegun Ayeni; Olu Adde of Ekinrin Adde, Oba Anthony Bamigbaiye Idowu, other members of the academia among others.