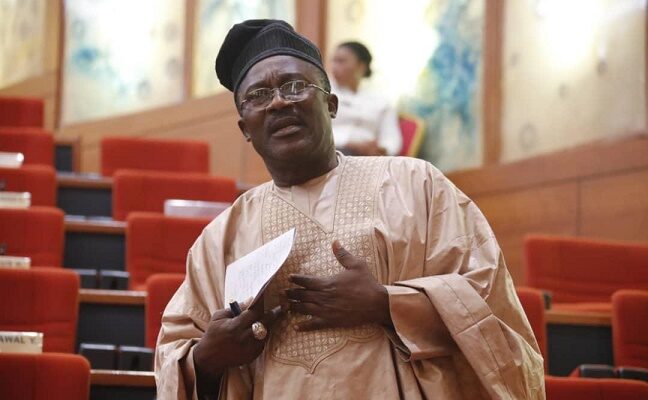 Senator Smart Adeyemi (APC/Kogi West) has been honoured with an award for his excellent contribution to nation building and support for the masses.

Kogi Progressives Association (KPA) said the ‘Most Outspoken Senator in the 8th Senate’ award is in recognition of Senator Adeyemi’s eloquence on national issues on the floor of the national assembly.

Presenting the award to the Senator, the state coordinator of KPA, Comrade Abdullahi Ismaila said the award was based on the contribution of the Kogi west Senator on the floor of the Senate, which he said has positively impacted on nation-building.

The award Ceremony which took place on December 1 at the National Assembly Complex in Abuja was graced by some Senators and political friends of Senator Adeyemi.

Ismaila stressed that the quality representation of Senator Smart Adeyemi has portrayed the Kogi state in a good light.

“Your outspoken nature and the fact that you have brought Kogi in good light, has endeared this association to appreciate and encourage you to do more throughout your remaining tenure in the Senate and even outside the red chambers,” he said.

According to Ismaila, the first, second and third terms of Senator Adeyemi have been very eventful for the people of Kogi West Senatorial District , Kogi State and Nigeria in general.

He added that the Senator since he was elected has attracted several Federal Government projects to his constituency, “notably among these projects is the sighting of the Federal University in Lokoja among others.”

In his response, Senator Adeyemi appreciated KPA for finding him worthy of the honour.

Adeyemi lauded the association for its mission, vision and contribution to national development.

“Kogi State is one of the most blessed states with everything needed for a state to develop. We have water, gemstones, iron and manpower, this component alone is enough for the greatness of the state,” Senator Adeyemi added.

He further said that he never regretted his decision to openly support Governor Yahaya Bello, saying it was the best thing to do at that time.

The Senator urged members of KPA to continue to give their total support to the government of Alhaji Yahaya Bello.

Adeyemi further pledged his continuous support to the association in its programs and activities, urging members to continue to do that which will encourage and uplift Kogi State, adding that the progress of Kogi State should be sacrosanct.

“I, therefore, urge Kogi Youths to be United irrespective of tribe, religion or region and see our diversity as what binds us together devoid of hatred and betrayal,” Senator Adeyemi admonished them.