Home News 2023: BVAS and the Need for APC to Field a Popular Choice for Nov 11 Kogi Guber Election 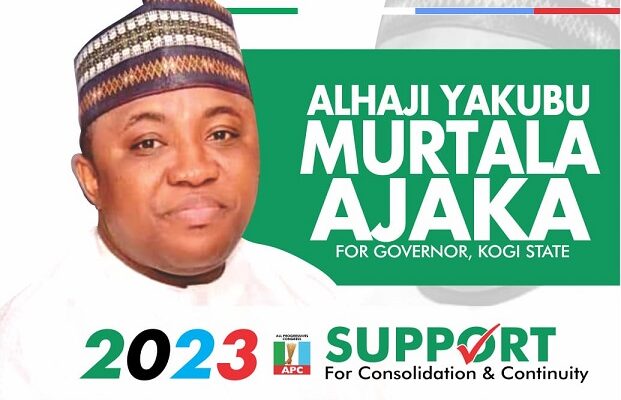 Bimodal Voter Accreditation System (BVAS) is a technological device used to identify and accredit voters’ fingerprints and facial recognition before voting, while the INEC Result Viewing Portal (IReV) is an online portal where polling unit-level results are uploaded directly from the polling unit, transmitted and published for the public.

At the front end of the online portal, members of the public can create personal accounts with which they can gain access to all uploaded results stored as PDF files.

INEC would conduct free and fair elections and deliver electoral justice in 2023.

The new electoral act has made it practically impossible to rig elections. If you are not popular, you will lose. Not even INEC can help. And only a popular candidate with a track record stands the chance to win an election come 2023. BVAS is the master stroke.

It is on this background that the urgent task before Kogi State All Progressives Congress (APC) will be the search for the right candidate — as doing this — will be an important step.

Candidate selection is the process by which political parties decide who will be on the ballot paper as their recommended candidate.

How they make that choice is mainly determined by their own internal rules and procedures.

Kogi state needs a sober, self-aware, cosmopolitan person who is sensitive to the poverty ravaging our land. An active, someone who commands presence and is ready to tackle the onerous responsibility of government.

The only way to make this happen is to fight for a popular choice. And that starts by putting our best forward for the top office come November 11 2023.

He stands tall among others.

If we want to build on the progress that Alhaji Yahaya Bello and the APC have made so far, then we are going to need Yakubu Murtala Ajaka.

He is not coming to enrich himself, or enrich members of his family.

Murtala Ajaka’s decision to run for public office is to give back better, as the government still holds the ace in terms of capacity and resources to bring social goods to the largest numbers of people.

On various occasions, Murtala Ajaka has humbly acknowledged what the Almighty God has done for him, his story has been the product of grace. There is no limit to what the Almighty can do. God is the God of “more than enough.” He is not just the God of abundance, but the God of more abundance. He is not just “more abundant; The “far more abundant” God has blessed Murtala Ajaka in more than he can comprehend. And as a Muslim, he is determined to do more, in giving back to his people.

Murtala Ajaka doesn’t care for personal success anymore. He had more than he bargain for by the grace of God.

Murtala Ajaka sees personal riches as the “vanity of vanities”, and “all is vanity”. What matters most to him now, as always, is to change his environment and make it better than it was before and simply for the sake of others and not just for himself.

Murtala Ajaka is in this race because of the increasing joblessness and hopelessness he has seen among Kogites. He has joined the political terrain of Kogi state because for him it is simply the best way to better a lot of his people. The way to transform society is largely dependent on the actions and decisions of those who occupy public offices.

Murtala Ajaka is in this race because ideas matter. Ideas rule the world. Ajaka is a thinker and a doer combined. His strategic and critical thinking makes him much more advanced than others. If you can’t think — you can’t do it. If you can’t conceptualize it, you can’t execute it. There is no “practical” that can work without a sound theory or concept. Every society that makes progress is one led by political leaders who have and are comfortable with ideas and intellect.

The quality of a true leader is the ability to see the unique good point in every human being and this is what Ajaka represent, and this is the governor we all pray for.! Humility is one rare asset you can’t snatch away from him. He is a team player anytime. He shares ideas with his subordinates and bows to superior arguments. This communication advantage further endears him to many. This quality contributed to the success he achieved as a Personal Assistant to Governor Mai Mala Buni of Yobe State.

Akaka has done more for his people without holding any position in his beloved state, such; as a local government councillor, Chairman, SSA and commissioner, Ajaka has impacted so many lives positively across the entire state. It is not how much you have but what you do with what you have makes a difference. Over the years, this has been the character of Murtala Ajaka. He will do more if given the support needed.

I believe Murtala Ajaka will consolidate and sustain the legacies Alhaji Yahaya Bello will leave behind and make Kogi great again. Murtala Ajaka is going to be what Babatunde Raji Fashola and Professor Babagana Umara Zulum mni are to Asiwaju Bola Ahmed Tinubu and Kashim Shettima respectively. All of Governor Bello’s accomplishments will be consolidated. We only need to support him and get him elected as Governor.

In the word of Rebbe Nachman; when you stir up garbage you raise a stink. When you rub spices in your hands, you raise a beautiful fragrance. A good leader agitates the good in people and brings out their perfume. Ajaka is the right man for the seat of Kogi state governor.

Every day, Alhaji Yakubu Murtala Ajaka continues to prove that we still have goodness among us. He is diligent, courageous, energetic and full of wisdom to positively change Kogi State. He is the hope for Kogi State.