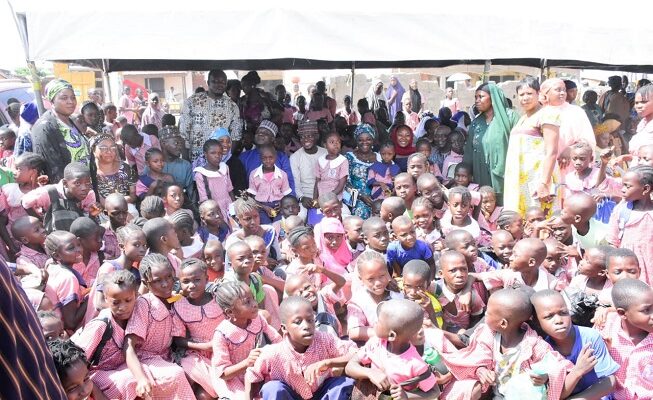 The Minister of Humanitarian Affairs, Disaster Management and Social Development, Sadiya Umar Farouk, on Thursday said over nine million Nigerian pupils have been benefitting from the National Home-Grown School Feeding Programme (HGSFP) across the country.

Farouk disclosed this at the hand over and distribution of feeding utensils for the beneficiaries of the HGSFP in Kogi, at St. Luke Primary School, Adankolo, Lokoja.

The minister noted that the HGSFP, designed to address poverty in all its forms, had succeeded in benefitting over nine million pupils across the country.

She added that over 100,000 women were empowered to cook under the programme.

“This programme at its core is designed to address poverty in all its forms and is a collaboration between the federal and state governments.

”The federal government is responsible for the release of funds, guidelines, policies, and monitoring, while the state carries out the day-to-day implementation, including procurement of food items, selection of cooks and vendors who prepare, cook and serve the meals to the pupils” she said.

Represented by the Deputy Director, Social Welfare of the ministry, Malam Aliyu Sogudo, the minister said an operational review is underway, to be supported by experts and technical partners.

According to her, the review would ensure that the programme succeeds in its objectives such as women empowerment, supporting the girl-child education, creating employment, and improving intergovernmental collaboration.

She appealed to the handlers of the feeding utensils to put the items into proper use for the benefit of the children.

The minister noted that the ministry had deployed an extensive, layered and technology-supported monitoring system that would give the ministry real time information of how the programme is being implemented and the areas that need urgent intervention and correction.

In his remarks, the State Governor, Alhaji Yahaya Bello, said the children of the masses were not involved in what happened at the national level before now, noting that the current administration of President Muhammadu Buhari, through the school feeding programme, has brought the dividends of democracy to the children and their parents.

Bello, represented by the Secretary to Kogi State Government, Dr Folashade Ayoade, however, cautioned the cooks not to convert the feeding utensils into their personal use, but for its intended purposes.

The governor warned that whoever is caught indulging in such attitude would not only be sanctioned but also will be prosecuted.

According to him, school enrollment in Kogi has increased tremendously from 115,000 to 258,000 pupils, while malnutrition has reduced drastically.

Onyekehi, who doubles as the Special Adviser to the governor on Special Projects, commended the Minister for the distribution of the feeding utensils, while appreciating President Muhammadu Buhari for the initiative.

He commended the governor for his unalloyed support for the programme, saying, ”we are grateful to our amiable and pragmatic Governor for taking the lead as far as the NSIP is concerned in Kogi State.”

NAN reports that the distribution of the feeding utensils was launched by Dr Ayoade on behalf of the governor.