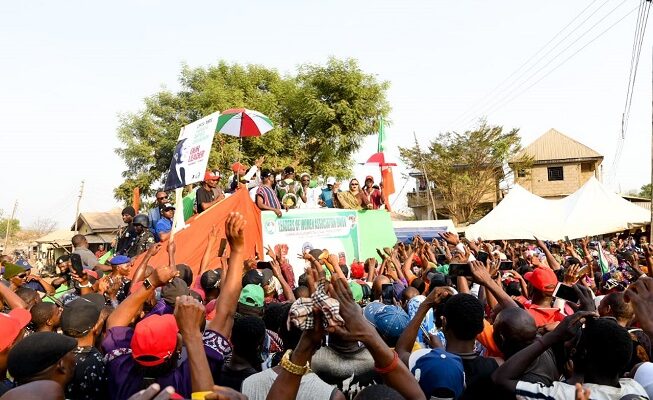 The senatorial candidate of the Peoples Democratic Party (PDP) for Kogi Central, Barr. Natasha Akpoti-Uduaghan has promised to fight for the resuscitation of Ajaokuta steel company when she gets to the Senate.

Natasha made this known on Monday when she took her campaign train to Ajaokuta local government area in continuation of her Ward-to-Ward campaign.

She called on the people to come out en mass on the election day to vote for her and other PDP candidates.

“Your action on February 25, 2023 general elections can make Ajaokuta steel company works, don’t allow party loyalty to deny us the opportunity to correct the past mistakes.

“By the special grace of God, this election will be the starting point of democratic revolution that will bring about reforms to our economy,  society, and our well being as a people. God will not come from heaven to change our condition, let’s take action to change our story.

“As we leave here today, take our message of hope to your family members and friends to vote for  PDP, don’t forget the promises you have made to yourselves. Whenever you drive through Ajaokuta steel company, remember these promises so that we can drive a new narratives for ourselves, so that we can reposition Ajaokuta as  one of the wealthiest local government areas in the country.

“We have suffered enough, don’t be afraid, don’t allowed yourself to be intimidated”, she said.

Barr. Natasha has been leading the campaign for the revival of Ajaokuta steel company. She had led protests to draw federal government’s attention to the moribund steel plant in her senatorial district.

Without political office, Barr. Natasha Akpoti-Uduaghan held the National Assembly to a standstill on 1st March, 2018 during the National Assembly’s sectoral debate where she exposed the factors militating the revival of Ajaokuta Steel Company, and suggested the way forward.