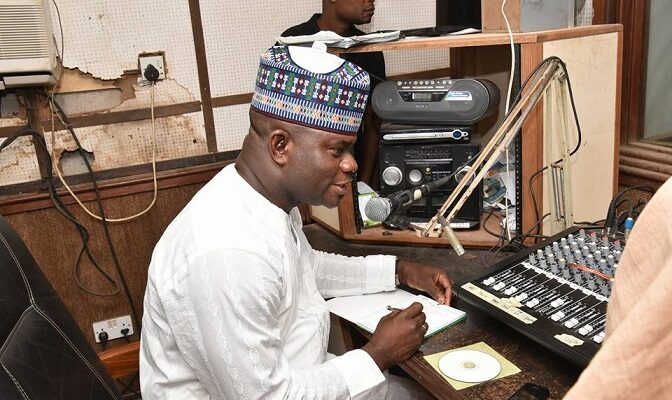 In a statement issued in Lokoja on Tuesday, the Executive Director of CHRCR, Comrade Idris Miliki Abdul lamented that the only state-owned radio station has been abandoned to rot away since going off-air in March 2021.

Miliki lamented that the premises of the now moribund radio station is currently in a sorry state.

“Despite the colossal amount of money been spent by the government of state on national and international broadcast stations thereby improving the private firm’s revenue, it kept denying Kogi people that brought them into power platform to promote their culture and adequate dissemination of information.

“Media is a medium of expression and information sharing, it also serve as a revenue generation and an outfit for employment, whether private or public owned in a society.

“It is regrettable to note that since March 2021 or thereabout, the Kogi State owned radio station have been off-air without justification and verifiable explanation by Kogi state government.

“No genuine effort has been made since then to put it back on-air.

“A visit to the premises of Kogi State radio station in Lokoja, that serve as the mouth piece or mouth organ of the government and people, is in a sorry state. The premises now hosts damaged furniture and unkempt environment that is not conducive for media service.

“Recall that in the 31 years of the existence of Kogi State, it is yet to establish its own television station in the 21st century,” he said.

CHRCR reviewed budgetary allocations for the radio station and expressed concerns that the broadcast medium is been underfunded.

“A closer look at the 2022 Budget, the Kogi State Government allocated a paltry N140,219,589 only on Kogi Broadcasting Co-operation.

“In the 2023 approved budget, signed by Kogi State Governor, Alhaji Yahaya Bello, N299,947,255 only was voted for Kogi Broadcasting Co-operation.

“In a digital era, what can this amount do, or improve in a medium that has been off air for the past 18 months or thereabout?

“The staff of Kogi State Radio Station can not practice their trade or profession since there are no equipment to do so,” he lamented.

CHRCR called on Governor Belo to declare state of emergency on Kogi State Broadcasting Co-operation as a matter of urgency.

He also charged the Governor to pay a working visit to the Kogi State Radio without further delay to save this all importance media establishment created by previous administration in the interest of justice, information dissemination, improvement on revenue generation and development of human capital.

“We call on the Nigeria Union of Journalists (NUJ) and all media practitioners, within and outside the state to save Kogi State Broadcasting Co-operation on the current mess it found itself in the hand of the current government.

“It is also worth mentioning that the media industry have suffered under this government than any other one. Allowances, vehicles and subventions created by the previous administration have been stopped by this government. We wonder what the Media in Kogi State have done wrong to deserve this unsavoury treatment by the present government.

“2023 elections is here, and regrettably, Kogi Radio has no role to play.

“We call on the Kogi State Government to urgently bring Kogi Radio Station back on-air without further delay.”