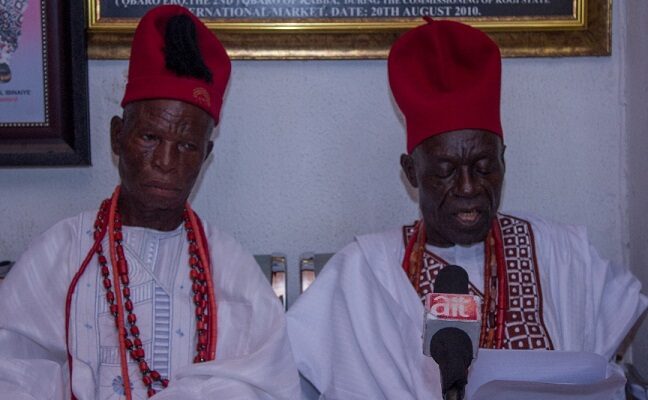 The Ilajo Royal family of Kabba in Kogi state has questioned the rationale behind current plan to build a parallel palace in the ancient town.

The royal family called on Governor Yahaya Bello to halt the plan to build another palace in Kabba pending full determination of the Obaro chieftaincy suit in the law court to avoid the break down of law and order in the town.

Speaking at a press conference on Tuesday, spokesman of the family and Secretary Ilajo Planning Committee, High Chief Peter Oloba noted that the Aoffin Palace Kabba has been existing since over 200 years ago and has housed more than 15 different Obaros.

He wondered why a new palace will be built at this point in time when litigation over the Obaro tussle is still pending in court.

Oloba said the Ilajo royal family was surprised when the current Obaro of Kabba, Oba Solomon Dele Owoniyi said there is no existing palace in the town during the recent Kabba cultural day celebration.

He averred that the claim that there is no existing palace was a calculated attempt to distort the historical facts of the ancient town.

The Ilajo family, while conducting newsmen round the tombs of over 15 Obaros who reigned, died and were buried within the palace and showing their paraphernalia of office, said it was an aberration to say Kabba has no palace even when the first Governor-General of Nigeria, Lord Fredrick Lugard and some past Nigerian leaders like General Ibrahim Babangida, Chief Olusegun Obasanjo and Vice President Yemi Osibanjob had visited the palace at different times.

“We see this distortion as a deliberate act of causing confusion and as usual, a way of distorting the historical facts, age long tradition and culture of Oweland by insinuating that there is no palace in Kabba.

“We hereby set the records straight, and wish to state categorically without equivocation, that Kabba Town has always had a Palace, a significant paraphernalia of royalty and the centre point of Owe culture and tradition. And this is the palace of Obaros of Kabba,” he said.

While stating the names and dates of some of the Obaros that reigned, died and were buried in and around the Palace, he mentioned Obaro Baba Mokelu (1870), Obaro Baba Ajinuhi (1870), Obaro Baba Gbayero Ajibohokun (1923), Obaro Atikekerejolu Oluyori (1928) and Obaro Obamudi Olu Owe Arokoyo (1932).

Continuing he said, “we therefore believe that the Kogi State Government should not get involved in an issue that is not unconnected with the matter in courts of the land and as such stay action on anything that concerns this sensitive matter.

“Finally, we of Ilajo, the Royal Family of Kabba, Oweland are praying the Kogi State Government to allow for the full determination of the subsisting court case before decision regarding palace is made.

“This plan, if implemented now, is capable of generating avoidable tension and can therefore put law and order into jeopardy,” he added.

Previous Post2023 Polls a Golden Opportunity to Right Wrongs of the Past - Natasha Tells Party Stakeholders in Adavi, Okehi Next PostRetired Heads of Service, Permanent Secretaries in Kogi Pulls Out of Nigeria Union of Pensioners