Home News 2023 Polls a Golden Opportunity to Right Wrongs of the Past – Natasha Tells Party Stakeholders in Adavi, Okehi 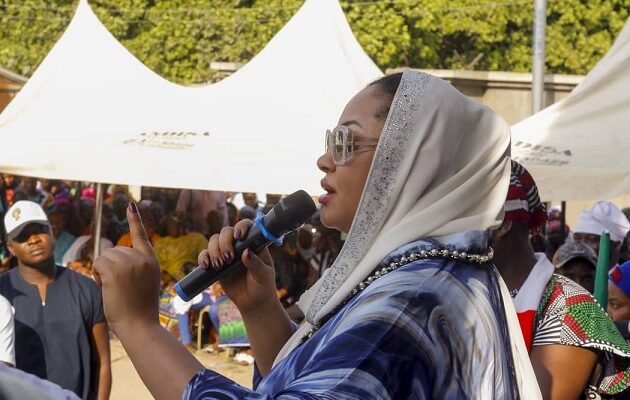 The Okehi PDP caucus meeting which took place at the residence of the former member of House Representatives member, Hon. AK Salihu in Ihima, was graced by party stalwarts in the local government area.

The meeting was aimed at gaining more support for PDP ahead of the general election.

Speaking on her mission,
Natasha said she is determined more than ever to represent her people at the Senate, adding that it’s another golden opportunity to right the many wrongs of the past.

She promised to be the most aggressive and eloquent Senator in the National Assembly to influence opportunities for her people.

“You’ve known me to be a woman of courage who stands for economic development and social justice. time is of essence and the rules of democracy and dividend of democracy have always been the same but the kind of representatives we sent forth to represent us make a big difference.

“It doesn’t matter how long you’ve been in a political party, the capacity and influence of the political representatives matter a lot.

“Every motion I shall present and every bill I will sponsor will be in the interest of the people of Kogi Central.

“You must be eloquent and competent to be a good legislator, that’s exactly what I am going to do.

“I promised to be the most aggressive and eloquent Senator in the National Assembly.

“It’s not about the spoken words, it’s by the content of the heart.

“By the time Ajaokuta and Itakpe are working and royalty is paid, the standard of living would be improved. I will ensure we go back to ask that the right things be done for the rights of the host community to be given to us.

“This is the people’s project, I don’t have a godfather, I wouldn’t be in the Senate and somebody would send me a note to remain silent during plenary because somebody sponsored my election.

“This is one more chance to right the wrongs of the past, collect your PVC, your votes will count, this is unlike the 2019 election when we don’t have BVAS, don’t be afraid, don’t be intimidated, don’t let terror scare you and derail from the future you want for your children.

“It’s not too late to speak to our brothers and sisters in the other party, we will not fight them, we will make them support us through our actions. I am for everyone, this is the time to change our stories, I will be here for you and I believe you would be there for me”, she concluded.

Natasha Akpoti-Uduaghan Campaign Organization noted that the meetings are steps for the PDP senatorial candidate and other candidates of the party to win the 2023 general elections.

The campaign organization added that the acceptance of Natasha Akpoti-Uduaghan in Kogi Central is evident in the rousing welcome given to her by the people of Ebiraland.