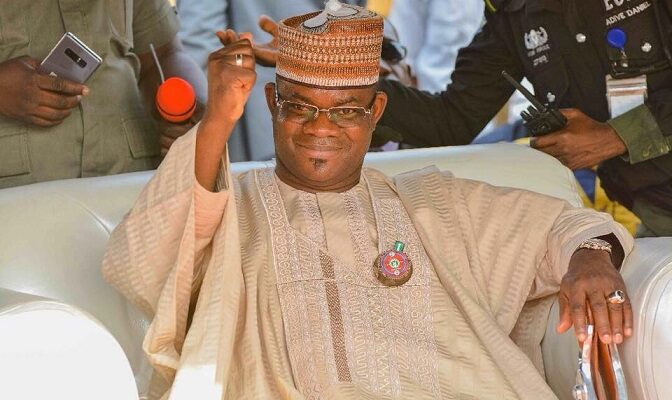 Governor Yahaya Bello of Kogi state has been described as the backbone of women in governance.

Female appointees from Kogi Central senatorial district made this known in Lokoja on Wednesday when they unanimously passed a vote of confidence on Governor Bello.

At the meeting of female political office holders from the central senatorial district, the women praised Bello for being exceptional in leadership.

The women, led by the Managing Director of Kogi Enterprise Development Agency (KEDA), Rekiya Onaivo Sanni, described Governor Yahaya Bello as their backbone and pride, adding that Kogi women never had it so good like they currently are benefitting since his assumption of office in 2016.

The women who applauded the Governor for his developmental strides in massive infrastructural development in health, education and agriculture, and enjoined him not to be distracted by mischief-makers.

“Governor Yahaya Bello is profoundly passionate about his people, the welfare and the development of the entire state are his interest.

“We are here to support a pragmatic, dogged, fearless and credible young man with good records. Our dear Governor Yahaya Bello; the pride of Kogi women has continued to attract development to the State.”

The group condemned mischief-makers who they said are desperate to dent Bello’s good name and tagging his name in the activities of some criminal elements.

“Obviously, it is no news that the Executive Governor during his first tenure till moment has continued to combat insecurity in the land.

“Kogi Central, his home, has in the past been rated as the highest in perpetrating crimes but Governor Yahaya Bello came on board and rid it of all criminals and crimes. Now Kogi people can sleep well and travel from one community to another without fear of being killed or kidnapped. All kudos to our governor,” Hon. Halimat Ohunene Saliu, Permanent Member One of Pilgrims Board stated.

“The Governor also built security architectures that have earned him awards both national and international. So, if anyone is saying he is sponsoring bad elements, then the person needs to go back to the history of how Kogi used to be and now,” she further added.

They mentioned his current achievement in the health sector, advocacy for the inclusion of the state as an oil-producing state, which in the long run places the state at a pace of accelerated growth.

Similarly, the group threw their support on the Presidential Candidate of the All Progressives Congress, Tinubu Asiwaju, saying that he has all it takes to reposition Nigeria for rapid growth.

“Governor Bello is working hard for the state. We will continuously follow him. His candidate is our candidate. Whatever he says is good for us, is our focus.

“On this day, 9th November 2022 we, the female appointees from Kogi Central Senatorial District under the leadership of Alhaji Yahaya Bello who has given so much recognition to women at the state and local government levels by appointing women to man-sensitive positions in the state, and made it possible to have women as vice chairpersons across the twenty local government councils, with women councillors as heads hereby pass our votes of confidence on Governor Yahaya Bello.