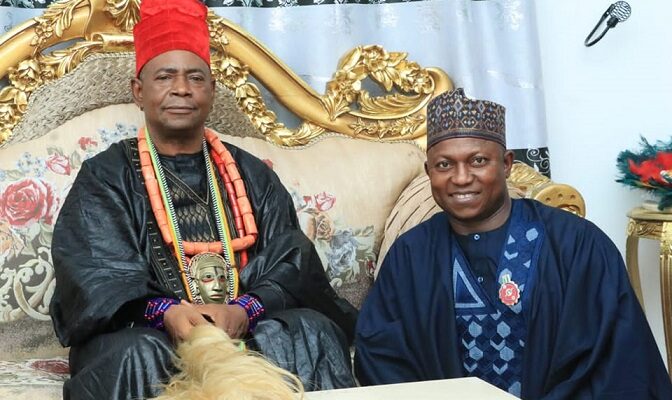 This was formally disclosed at the Ata Igala’s palace, Idah on Wednesday when the Rector paid an appreciative and acceptance visit to the paramount ruler of the Kingdom.

Ata Igala, who is the Chancellor, Federal University Oye-Ekiti, Ekiti State, had earlier in a letter addressed to Dr Usman said, “The conferment is based on your immense contributions to the socio-economic development of lgala Kingdom, Kogi State and our dear country, Nigeria.”

The monarch while appreciating the efforts, dedication, commitment and achievements of Dr. Usman in the last 2-years of his Leadership as Rector, stressed that the conferment of the chieftaincy title is a mark of honour for Dr Usman’s selfless service and challenged him to do more for the Igala Kingdom, Kogi State, and by extension, the fatherland.

While appreciating Dr. Usman’s uncommon leadership qualities as a worthy and illustrious son of the Igala nation, the traditional ruler showered blessings and prayers on the recipient and charged him to continue on the path of selfless and exemplary leadership in the discharge of his responsibilities, noting that, “It’s not how long you live that matters, but the impact you make while you are alive.”

Responding, Dr. Usman commended the Ata Igala, HRM (Dr.) Matthew Alaji Opaluwa Oguche Akpa  for the honour and recognition, and assured the monarch that he would continue to do more for the development of Igala nation, Kogi State in particular and Nigeria in general.

He stressed that he would never disappoint the monarch on the confidence reposed in him.

The Rector said he would remain committed to the development of the State, and would discharge his duty creditably as expected of him.

He appreciated His Excellency, Alhaji Yahaya Adoza Bello, Kogi State Governor, for giving him the platform to serve and contribute his quota to the development of the state.

Earlier, the Ejeh Ofu, HRH Alhaji Akwu Obaje, appreciated the Ata Igala  for always identifying and appreciating the efforts of the illustrious sons and daughters of the land, stating that such gesture would attract more development to the land.