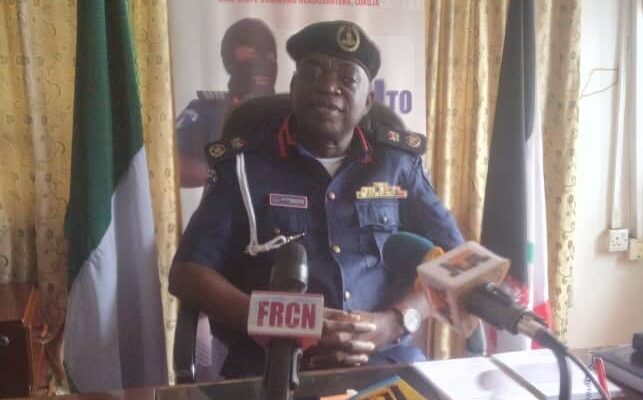 New NSCDC Commandant Vows to Smoke Out Criminals in Kogi

Newly deployed Kogi State Commandant of the Nigeria Security and Civil Defence Corps (NSCDC), John Kayode Oyinloye has vowed to smoke out all criminal elements from their hideouts.

Speaking during his maiden meeting with journalists in Lokoja on Monday, Commandant Oyinloye stated that his officers are committed to the NSCDC mandate and will ensure effective protection of critical infrastructures in the state.

The Commandant said his administration would pursue the onslaught on kidnappers, criminals and all other related crimes towards vigorously.

He disclosed that the female squad recently established would be in charge of security of institutions of learning, especially primary and secondary schools, to check kidnapping, cultism and excessive behaviour of students.

He said the NSCDC would soon organize a stakeholders meeting towards adequate security of schools and prevention of crimes.

”A lot of unexpected development is happening among students of secondary schools in the society today.

“Cultism that used to be rampart in higher institutions in the country, few years ago, has now descended to secondary schools and by extension, primary schools.

“We are planning to meet with the Commissioner for Education with a view to organising stakeholders meeting with the school proprietors, parents and even students and pupils on how to guard against crime and criminality in secondary school.

“From the meeting, we will get the feeling of the parents, proprietors, students, pupils, school management and government regarding their problems and how to find lasting solution to them to ensure peace,” he said.

On the need for enforcement of the official pump price of petroleum in Kogi State, the Commandant said a meeting has been scheduled to with the the state chapter of Independent Petroleum Manufacturer Association of Nigeria (IPMAN).

The Commandant called for synergy between media and NSCDC in the state.