Home News N5bn Lawsuit: Natasha Mocks Kogi Govt for  Outright Denial of Linking Her to a Terror Suspect, Calling for Her Arrest 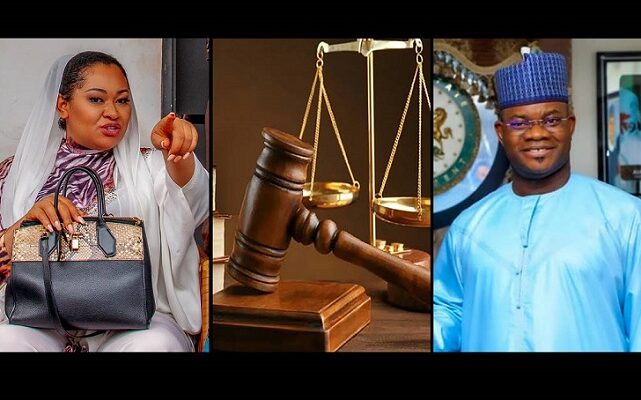 N5bn Lawsuit: Natasha Mocks Kogi Govt for  Outright Denial of Linking Her to a Terror Suspect, Calling for Her Arrest

… Says They Have Become Jittery.

The Natasha Akpoti-Uduaghan Campaign Council has mocked the Kogi State Government and its Commissioner for Information, Kingsley Fanwo for denying ever linking Barr. Natasha H Akpoti-Uduaghan to a terror suspect and terrorism, saying that they have become jittery seeing the defeat staring at them in their faces.

In response to the defamatory suit by the Kogi Central PDP senatorial candidate, Natasha Akpoti-Uduaghan’s 5 billion Naira defamatory suit against the Kogi State Government, State Governor and the State Commissioner for Information, Kingsley Fanwo; the defendants have denied issuing statements connecting Barr. Natasha to terrorism or calling for her arrest.

The defamatory statement was published in national dailies like Vanguard and others where the State Government called on the security agencies to order for her arrest and questioning for allegedly planning to attack the State with the said terror suspect.

Irked by the deliberate attempt to drag her hard-earned reputation in the mud, Barr. Natasha, through her lawyer Femi Falana SAN, filed a lawsuit in Abuja High Court dated 10th November, 2022 and sought the order of the court to declare that the publications are libelous and defamatory against her.

Also, an order directing the defendants jointly and separately to retract the libelous publication and issue a public apology.

Natasha also sought an injunction restraining the defendants jointly and separately by themselves, agents or servants or otherwise from publishing or causing to be published the said similar words defamatory against her, the claimant.

However, in its reply to the motion, the Kogi State Government denied ever issuing any defamatory statement linking Natasha Akpoti-Uduaghan to any terror suspect or calling for her arrest.

The campaign organization is bewildered that a supposed man of God who speaks for the Government and alleged on national TV to the chagrin of the entire nation that Natasha has link to a terrorist and terrorism can surreptitiously deny his statement without batting an eyelid.

The campaign urged the good people of Kogi State to be wary of those who speak from both sides of the mouth as such  persons can never give good account of the peoples mandate they hold.

The defence of the Kogi State Government reads in part: “Without prejudice to the objection to the Jurisdiction of the Honourable Court and save and except as herein after expressly stated and admitted, the 1st – 3rd Defendants deny each and every allegation of fact contained in the Claimant’s statement of claim as if same were set out and traversed seriatim.

“The 1st 3rd Defendants in further response to paragraphs 1, 2 and 3 of statement of claim states that facts contained therein are within the exclusive knowledge of the Claimant; Claimant is therefore put to the strictest proofs of the averments contained therein.”