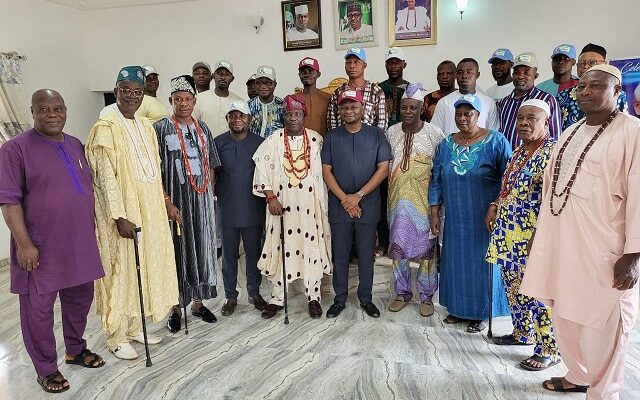 An aspirant for the Senate in Kogi West Senatorial District, Dr Muyi Aina and his team, New Dawn 2023, on Friday flagged off his campaign for the 2023 election on the platform of the All Progressives Congress (APC).

Aina, a holder of Bachelor’s of Medicine and Bachelor’s of Surgery (MBBS), Master’s in Public Health (MPH) degrees and Doctor of Philosophy (PHD) is a seasoned business leader and executive with international experience in human development, business leadership and management.

He is also Chief Executive Officer of Solina Group and Executive Director of Solina Center for International Development and Research based in Abuja.

The team’s first port of call was  the palace of the Bajana of Obajana, Oba Idowu Isenibi who welcomed the Kogi West  senatorial aspirant with Royal blessings and words of wisdom. Dr Aina had earlier been recieved by a mammoth crowd of admirers and supporters who could not have enough of him.

However, he seized the opportunity to address the Monarch and his numerous supporters.

Speaking on why he was in the race for the senatorial seat of Kogi West zone, the Egbe-born medic and successful businessman turned politician explained that he is contesting to raise the bar of representation through quality networking and collaborations and to also deploy his wealth of experience garnered over the years.

Dr Aina promised to improve the standard of living of the good people of Kogi West and also change the narrative of backwardness, squalor and underdevelopment, if given the opportunity to emerge as their next Senator.

“Health, education and economic prosperity shall be the major thrust of my stewardship” he said, with a promise to do things differently as he comes “to the table of service with sincerity of heart, character, competence and commitment”.

He enumerated the various interventions he had done in his personal capacity while promising to do more with government resources through productive engagement of value yielding advocacies and synergy building that will attract the much needed dividends of Democracy to the people of Kogi West.

The flag-off, coming after several months of intensive consultation with stakeholders from across the seven local governments in Kogi West, continued today with the tour of Yagba West Local Government including the courtesy visit to the palace of the Elegbe of Egbe and Chairman, Yagba West Traditional Council, HRM, Oba Ayodele Irukera at Egbe.