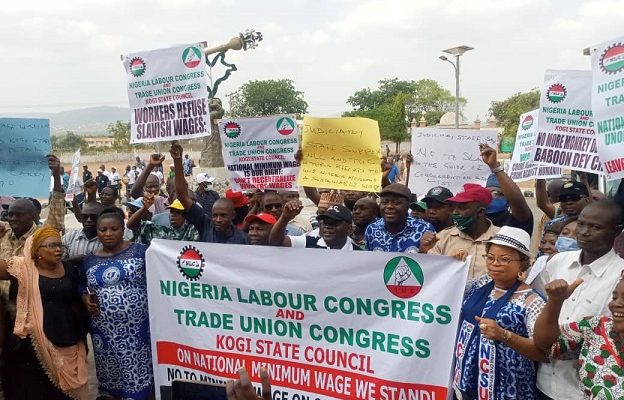 Organized labour in Kogi State has given the state government 12 days ultimatum to implement the N30,000 minimum wage or will be forced to begin an indefinite strike.

The workers said if their demands are not met on or before 22nd March, 2021, they will down tools.

The Nigeria Labour Congress (NLC) and the Trade Union Congress (TUC) disclosed this on Thursday in a peaceful protest while presenting their letter to the Speaker, Kogi State House of Assembly on the transfer of the National Minimum Wage from the Exclusive Legislative List to the Concurrent Legislative List.

Speaking on behalf of workers, the Kogi State Chairman, Nigeria Labour Congress, Comrade Onuh Edoka said since the state government set up a 17 man committee in 2019, nothing has been heard from them.

While noting that Kogi workers are suffering in the state due to the unfriendly economic condition of the country, the labour leader accused some cabinet member of the state government of trying to give Governor Yahaya Bello a bad name.

“The committee headed by the SSG in 2020 hide under the guise of corona virus not to submit its report to the Governor. Up till now, nothing have been held from them. Let the committee members come together and present the report of on the implementation of the new minimum wage to the Governor.

“No cabinet member should deceive Governor Bello so that they will not submit their report. The Governor is aiming for something higher, and this could be a panacea to his political ambition.

“We therefore want to plead with you, Distinguished Speaker, to use your good office to prevail on the committee set by the state government on the implementation of the N30,000.00 new minimum wage in Kogi State to expedite action on her works in record time, so as to guarantee industrial harmony and further strengthen peace in the state,” he said.

Edoka and his team who were received by the clerk of the House, Ibrahim Amoka, on behalf of the Speaker, however called for an end to percentage salary at the local government level.

He lamented that local government workers are collecting 40 percent salary, noting that life is becoming unbearable for them in the state.

“The issue of percentage payment of salary to employees at the Local Government level needed urgent attention of the honourable house to mitigate the effect of the hardships steering the workers at that level in the face.

“Life indeed has become unbearable for an average Kogi worker because of the quantum of the current N18,000 national minimum wage being paid in the state vis-à-vis its usefulness in the market environment.

“Consequently, there is an urgent need to cash-back all promotions already earned by workers and we seek the intervention of the House of Assembly in this regard please.”

On the bill by the House of representative to transfer the National Minimum Wage from the Exclusive Legislative List to the Concurrent Legislative List, Edoka admonished President Muhammadu Buhari not to give room for fifth columnist but continue to stand with Nigerian workers.

He recalled that minimum wage is a agreement of the International Labour Organization (ILO) which was domesticated during the Alhaji Shehu Shagari in 1981.

“Mr Speaker sir, we equally want to let you know that President Buhari should not give room for the fifth columnist but continue to stand with Nigerian workers. Minimum wage must not be removed from the exclusive list.

“Any attempt to remove Minimum wage from the exclusive list will incidentally bring suffering to all organizes  Nigeria workers and the vulnerable, because it is the same wage we collect and we buy from them.

“Honourable Speaker, the implications of transferring the national minimum wage from the Exclusive Legislative List to the Concurrent Legislative List are very dire. Some of the implications include: A license for State Governors to drag the country back to the era of ridiculous slave wages which in the past had precipitated multifarious industrial crises in different parts of the country;

“The exponential creation and expansion of a community of the working poor with all the attendant consequences for socio-economic cohesion, stability and progress; and it could lead to the exclusion of the private sector (both organised and unorganised) from the concept, rationale and logic of a national minimum wage, yet, it is in this informal sector that horrendously unfair labour practices take place.

“Removing it will be insulting the intelligence of the national assembly and those  that drafted the constitution that kept it in the exclusive list. The excuses they are giving saying let state pays according to their wages is totally unacceptable.”

He said the bill is anti workers and should be stepped down.

It could be recalled that the House of Representatives, two weeks ago, introduced the bill which according to the sponsor, Hon. Garba Mohammed, would allow both the Federal and state governments to freely negotiate a minimum wage with their workers in line with the nation’s federal system, a move which the protesting workers say does not work in their favour.