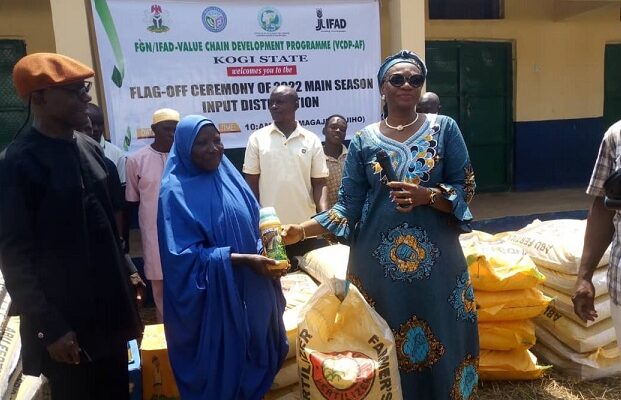 The Federal Government through the Value Chain Development Programme  (VCDP) supported by International Fund for Agricultural Development (IFAD), has begun the distribution of farm inputs to rural farmers for the 2022 main season farming in Kogi State.

Speaking at the inauguration on Tuesday in Magajiya, Lokoja, the National Coordinator, FGN/IFAD-VCDP, Dr Fatima Aliyu, said the essence of the farm inputs’ distribution was to empower rural farmers to boost agricultural production and ensure food security in the country.

Aliyu, who was represented by Dr Chyka Unamma, Agricultural Production Advisor of the Programme, stressed that VCDP does not give cash but inputs to farmers’ groups, and monitor the beneficiaries to ensure they use the items for the intended purposes.

She described farmers as most essential people and advised them not to regard themselves as poor people regarding their roles in the society to ensure the availability of food in the society.

She urged the farmers not to sell the inputs but to utilise them judiciously to enable the government achieve the set objectives in agricultural productions.

She noted that VCDP was presently supporting only 17 farmers’ groups involving in rice and cassava productions in five benefitting local government areas of Kogi State.

She disclosed that IFAD-VCDP had recently gave a grant to farmers under the ”Rural Poor Stimulus Facility (RPSF)” to cushion the effect of COVID-19 pandemic on vulnerable farmers in VCDP states of Enugu State, Kogi, Nasarawa State, Anambra, Benue, Niger, Taraba and Ebonyi.

Aliyu added that the RPSF was meant to sustain production and help farners recover more quickly from the impact of the COVID-19 pandemic.

In her remarks, the Kogi State IFAD-VCDP Coordinator, Dr Stella Adejoh, said the gesture was to boost food security and improve the wellbeing of rural farmers in the state.

She stressed that the programmes had made tremendous positive impacts on the lives of the rural farmers, improved their wellbeing and boosting food security in the state.

Dr Adejoh noted that farm input were not totally free as farmers would contribute 50 per cent of the total cost of agricultural inputs, while VCDP would as well pay the remaining 50 per cent, known as “Marching Grant”.

”This will enable farmers to know the value of it and to prevent misuse of the inputs,” she said.

Adejoh advised beneficiaries to make judicious use of the inputs to better their lives and contribute their quotas in boosting Agricultural production in the state and the country at large.

She enjoined the farmers not to sell the input but to utilise it for the purpose intended, saying it would be properly monitored to the point of utilisation at the field.

She warned them that there would be consequences if any of the beneficiaries sold any of the inputs.

She thanked His Excellency, Gov. Yahaya Bello, for his support and for creating the enabling environment for the IFAD/VCDP programmes to flourish in the state.

She stressed that efforts of the governor had ensured the success of the VCDP programmes and activities in the state, and prayed God to grant him wisdom to enable him achieved his set goals in all ramifications.

Some of the the beneficiaries, Aliu Muhammed, Zainab Muhammed, among others, expressed happiness to have for benefited from the programme.

They all promised to make judicious use of the inputs to complement the of efforts of the government.

They commended Governor Yahaya Bello for his developmental stride in agriculture, especially in farmers empowerment and assured supports to enable his administration succeed.

Inputs distributed include: fertilizers, cassava stems, agro-chemicals among others.

Spread the love
Tweet
Previous PostSelfless Service to the People is My Core Value – Amodu Yakubu Atai Next PostFlekosteel: How Nigerian Professor Helps to Ease Joint and Spinal Pain