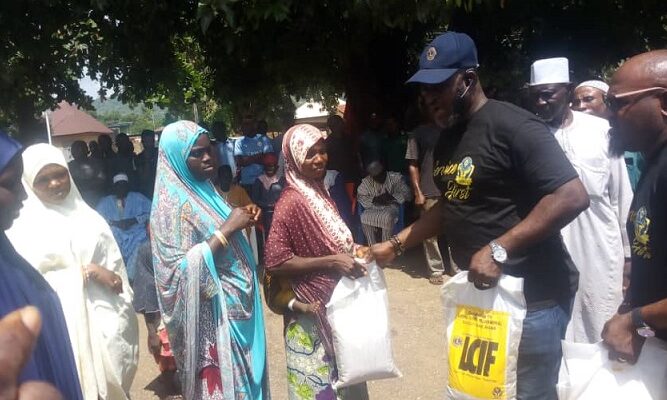 The Lions Club International, District 404A2 Nigeria, has donated food items to flood victims in Lokoja and Kotonkarfe Local Government Areas of Kogi.

Speaking to newsmen at IDP camp Adankolo, Lokoja, Lion Jide Bello, the Club’s District Governor, Abuja, said, ”the Lion club is a charity organisation that is always there to help where there is need”.

Bello said they were in Kogi to distribute food items and clothing materials to the displaced indigenes of the state.

”We heard about the flood disaster that submerged their homes and we made our enquiry to get the statistics of their numbers in various IDP camps in Lokoja and Kotonkarfe.

”So, we have brought food and other relief items to share and sympathise with them, and to say ‘where there is need there is always a lion’.

”On the whole, based on our statistics, we have reached out to over 3000 victims including males and females in Kogi.

”We give Kogi a priority because it is worst-hit by the flood disaster, next week by God’s grace we shall be visiting Rivers, Balyesa, Anambra and Ebonyi States,” he said.

He disclosed that the distributed items were donated by people, fellow lions, and the Lions Club International Foundation (LCIF) Abuja, which worth over N10 million.

He commended the IDP camps’ coordinators for ensuring proper coordination at the camps without chaos.

Also speaking, Lion Dr Ozi Okonofua, the club’s District Committee Chairperson for Site Preservation and Awareness, enjoined Government at all levels to be more prepared for the recurrent flood disaster.

He expressed the club’s dissatisfaction with the humanitarian aspect of the camps visited, saying there was no good sanitary condition which could result in outbreak of diseases.

He urged the governments to look at the plight of the victims to finding a lasting solution through collaborations with the club and other critical stakeholders to tackle the menace.

Some of the beneficiaries; Mrs Teni Isa, Hauwa Suna and Mrs Mary Sunday  thanked the club for alleviating their suffering and pray God to bless them.

”In fact, I am so happy because we never expected that such kind of items will come. May God bless them,” Isa said.

In his remarks, Isakoto appreciated the club for their visit, saying he was overwhelmed for the gesture towards his people.

The traditional ruler said the extent of destruction by the flood disaster in the area and all over was massive and beyond comprehension.

”Our place is always flooded and badly-hit because our people settled along the banks of River Niger and Benue.

”The extent of destruction is beyond what we can explain but we thank you for your donations, and pray that God will bless you

”I want to on behalf of the Traditional Council of Lokoja and Kotonkarfe as the Chairman, say thank you very much,” the royal father said.

The Ohimgye of Kotonkarfe was inducted as the member of Lions International Club by the District Governor.

Bello expressed hope that going forward the presence of the Lions international club would continue to be felt in the state.