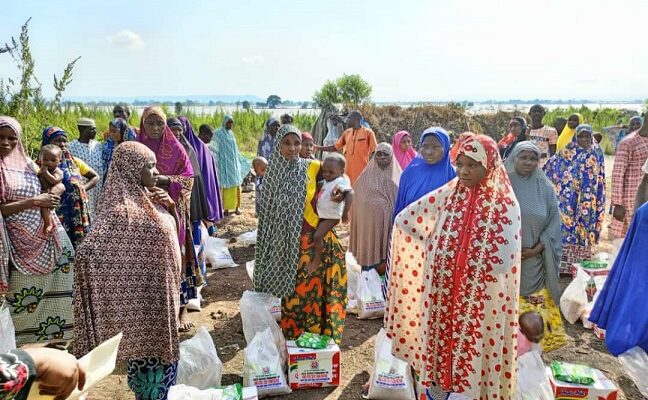 Lift Up Care Foundation Distribute N5m Worth of Food, Non-Food Material to Flood Victims in Kogi

The Executive Director of LUCAF, Mrs. Ahmed Lami, made the call while delivering food and non-food support to flood victims in Kogi state.

Items donated to the displaced persons included rice, packs of noodles, groundnut oil, salt, Maggi, sugar, detergents and other to care for the immediate needs of affected citizens in Kogi State.

According to Mrs Ahmed Lami, the initiative will be a continuous effort to ameliorate the suffering of people affected by flood and also to support the return process of post flood.

Other beneficiaries of the kind gesture from LUCAF’s food and non-food items distribution are displaced police officers from Division C police station around Texaco area in Ganaja village and people with disability (PWD).

“The annual flooding along communities in the low levels of rivers Niger and Benue for year 2022 has been described by experts as unprecedented. The release of water from dams both locally and internationally has added to the volume of water along the rivers resulting to a disaster along this corridor.

“The waters have returned in 2022 even in a higher volume wreaking more havoc on vulnerable citizens and residence of the state. The flood has sacked people from their houses and destroyed invaluable properties including crops, farmlands and other means of livelihood thereby subjecting men and women, school boys and girls to untold an hardship.

“In Lokoja the Kogi state capital alone, residents of Kabawa, Sarkin Noma, Adankolo, Gadumo and Ganaja village were submerged and cut off totally from the rest of state.

“Lift Up Care Foundation (LUCAF) team assessed the situation and came up with the plan to mobilize resources to support over thousands of households affected by the ravaging flood,” she said.

Lift Up Care Foundation (LUCAF) a non- governmental organization with special consultative status with United Nations (UN) based in Lokoja Kogi state continued her efforts of reaching out to her stakeholders across Nigeria, the current intervention is worth five million naira fully funded by LUCAF stakeholders and her board of trustees.

For contribution and support;