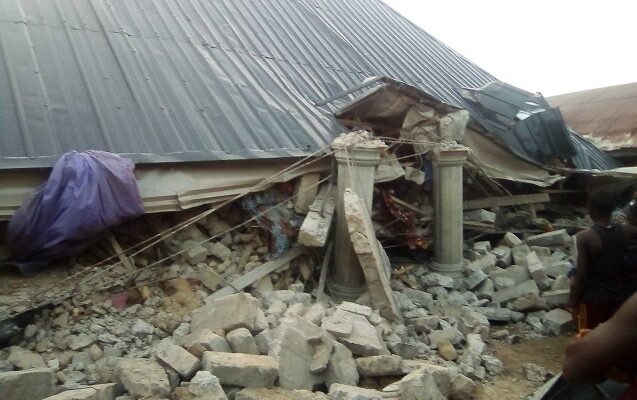 It was a double tragedy for some victims of flood disaster in Kogi state as a storey building where they took refuge collapsed, killing five persons.

No less than five persons have been confirmed dead in the building collapse. The deceased include four females and one male.

The building, which belongs to one Sunday Inajor at Ayah town in Ibaji local government area of Kogi state collapsed Wednesday night and left some unconscious with severe injuries.

The building was among many submerged by the devastating flood that ravaged many communities in Ibaji local government area recently.

It was learnt that following the flooding of bungalows in the affected communities, many residents, that could not be evacuated took refuge in few storey buildings available in their areas, for about a month.

It was gathered that the top floor of the building, which was occupied by many natives of Ayah collapsed Wednesday night leaving heavy casualties.

According to the Community Development Officer (CDO) of the local government area, Onalo Achimugu, the victims were among several residents who took refuge on the top floor of a storey building.

They were waiting for the flood to recede until the building collapsed.

The Chairman of the Ibaji LGA, Iko-Ojo Obiora, has aided the transportation of injured victims to hospitals in Irrua, Edo state and neighbouring Idah.

“A house collapsed at Ayah community, five people died instantly, many are unconscious while many were injured,” a native of Ibaji, Mr. Saturday Aromeh, raised the alarm Thursday morning on a WhatsApp Group – Ibaji Political Connect.

About 10 persons were earlier reported to have died on account of the flood disaster in Ibaji this year.