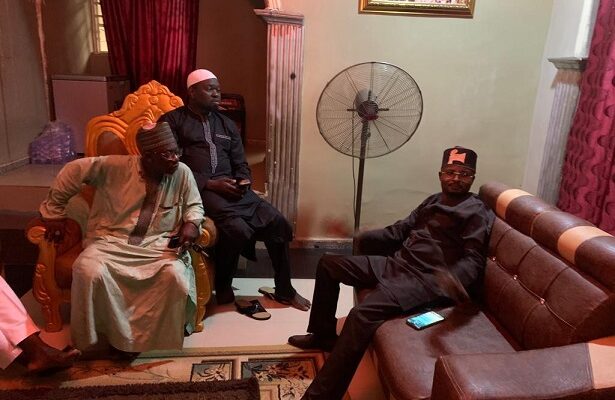 The lawmaker representing Yagba federal constituency, Elder Leke Abejide, has paid a condolence visit to commiserate with his friend, Dr. Hassan Abdulrahman Ocholi, a renowned philanthropist and political leader, who lost his mother, Hajia Hawa Hassan, to the cold hands of death on 30th August 2022.

The Chairman of the House Committee on Customs and Excise, who is running for re-election to the green chamber on the platform of the African Democratic Congress (ADC), paid the on Saturday in company of Chief Dare Olatunde, the chairman of Ventab Global Services Limited and Maiyegun of Isanlu, among other dignitaries.

Recall, thousands of dignitaries and top government officials, including Capt. Idris Wada, the former Governor of Kogi State; Pharm Abdulkareem Jamiu Asuku, Chief of Staff to the Governor of Kogi State; Senator Jibrin Isah Echocho, Senator representing Kogi East; amongst others turned up for the 8-day fidau prayers of late Hajia Hawa on Tuesday in her country home Aloji, in a clear indication that the late mother touched many lives as her son, Dr. Ocholi continue to provide humanitarian services of heavy impacts towards nation building.

Admonishing the chief mourner, Dr Hassan Ocholi, and the bereaved family, Elder Leke, described Hajia’s death as a great loss to the state, noting that it is excruciating that good people have to die untimely.

He urged the family to take solace in the fact that the mother lived a life worthy of emulation, adding that her legacies would live on.

The lawmaker prayed that God would rest the soul of the deceased while assuring the family, people of Aloji, and the entire Kogi East of his commitment to putting up his best for the people of Yagba Federal Constituency and beyond.

He promised to extend his hands of fellowship to Aloji community and involving the people in his future programs in honor of his friendship with their son, Ocholi.

Hon. Leke, in a brief interview, told Journalist that Asiwaju Bola Ahmed Tinubu is his mentor and believes strongly his presidency will unite Nigerians and rapidly transform the nation.

Hon Leke Abejide is the convener and founder of Asiwaju Confluence Campaign Organisation (ACCO2023), a grassroots political campaign structure set up for the Tinubu/ Shettima 2023 presidency.

He noted that ACCO2023 is a leading campaign structure in Nigeria canvassing and mobilising millions of Nigerians to support ‘The Tinubu Project’.

In a similar development, the immidiate past Chairman of Dekina Local Government Area, Comrade Muhammed Ali paid a condolence visit to Dr Ocholi along side some of his supporters.