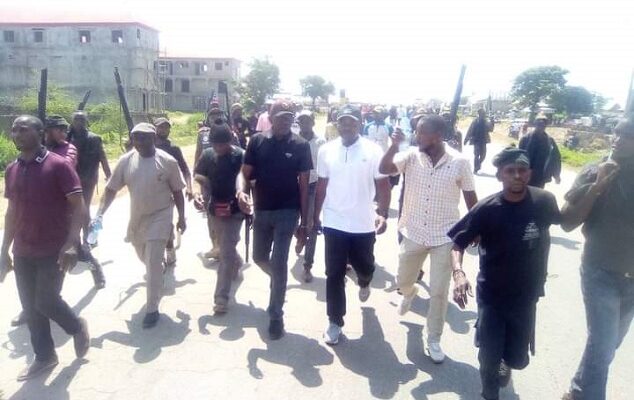 Kogi vs Dangote: Delirium of Power

Some news reports hit the reader, first as a joke, then as an atrocity of the worst kind. The invasion of Dangote Cement plant at Obajana in Kogi state by thugs of the state government was one of those. It should qualify as the news of the year – for its sheer absurdity.

However, before going forward, it is usually necessary to make some truthful disclosures.

I have known about Dangote as long as my articles started to appear on this page. We have met only once,  and  I can’t remember the date. He was a major shareholder in a bank, which was one of the 19 banks I predicted to fail during the Abacha era. My Editor at the time thought I was crazy. How could a Dangote bank fail? Little did I know that Alhaji Aliko Dangote himself had foreseen the bank’s collapse and had bailed out.

I was called to meet him to correct the error that he was still with the bank  – one of the failed banks of the Abacha era – leading to the draconian Failed Banks Decree. All the 19 banks I listed went under.

I was also critical of the handling of  the formation of Transcorp Plc, a project  which  was  promoted  by President Obasanjo on his way out of office, from which Dangote, Otedola, Chief Festus Odimegwu, Dr Ndidi Onyuike, Mr Tony Elumelu – among other billionaires benefited at the expense of fellow Nigerians. Obasanjo himself later sold the 200 million shares at N7.50 per share when Transcorp went public. The shares were given to him free.

To me, it was more like a scam than a deal. It amounted to robbing millions of us Peters to pay a few Pauls.  Millions of investors in Transcorp still lick their wounds.

I am not a shareholder of Dangote Group of Companies. My own investments have been earning better and more consistent returns than Dangote. I have no interest in Dangote to protect.

Envy is a corrosive element in a society

“You will find envy whenever there’s good fortune. There are people who will envy you if you’re happy.” – Aleksander Solzhenitsyn,  1918-2008.

I have made those  disclosures  in order to avoid some ignorant individuals assuming that I have been settled by Dangote on this matter.  That said; it is my belief that unknown to most Nigerians, the most wealthy Nigerians, who are also the largest employers in the private sectors, are quite often the most envied  and sometimes need our help if indigenous entrepreneurs are to continue to lead the way in creating wealth for themselves and providing work employment for others. We also need to be reminded that foreign investors  are watching how we  deal with our successful businessmen. I have the feeling that in Nigeria as elsewhere envy plays a part in every attack on our multi-billionaires. Some people want to bring them down when they have the opportunity.

One of the wealthiest Nigerians had his house barricaded by the Economic and Financial Crimes Commission, EFCC, under Nuhu Ribadu, on a trumped up charge because he failed to deliver on a promise to build a Faculty of Engineering in a private university in the South West — owned by a topmost leader. He escaped arrest and had to negotiate his way back to Nigeria by releasing millions of naira for the project.

A Governor threatened to revoke ALL the Certificates of Occupancy of an International Oil Company for failing to contribute to his re-election campaign fund on the grounds that the C of Os, which were granted while he was still in primary school were not valid.

There is no need to provide other examples of abuse of power induced by envy or self-interest by powerful officials targeting our richest businessmen and women for a shakedown. Invariably, the measures are dressed up as “public interest”. They invariably end up being settled out of the public view.

“The administration of justice is the finest pillar of society.” – US President George Washington, 1732-1799.

And justice everywhere demands that nobody, not even a government, should judge his own case. The government can accuse, but, it should not impose penalty without giving the accused a chance to defend himself, as Kogi State government has done by closing Dangote Cement plant at Obajana. Below are three versions of the case against the company as stated by government officials.

After reading the reasons advanced by the Governor, the Secretary to the  State  Government, SSG,  and the Speaker of the Kogi  State  House of Assembly,  KSHA, which will be presented shortly, the most obvious question is: why now?

According to the Governor, “We received several petitions from the general public over this particular subject. In the past five to six years, all efforts to seat with the proprietors of Dangote Conglomerate failed.”

The SSG, Dr Folashade Ayoade, claimed that, “There is no evidence of consideration paid by Dangote Industries Limited to Kogi State  from the alleged transfer of Obajana Cement Company Plc and no dividend was paid to the state from the profits realised from the inception of Dangote Cement Company Plc to date…”. So, as far as the SSG is concerned, the “particular matter” is dividend payments.

Mr Matthew Kolawole, Speaker of the Kogi House, has a different bone to pick with Dangote and for wanting the  agreements between Dangote and Kogi declared null and void. Here is what he said. “It is clear that you cannot sell a state government property of any form without a resolution of the Kogi State House of Assembly…All the transfer process of share capital to Dangote from Obajana by the previous administration was without any law backing it by the Kogi State  House of  Assembly.”

So, here the “particular matter” is the legality of Dangote’s acquisition of Obajana  Cement Company Plc shares and its right to continue to occupy the sites.

It was even alleged by some of the petitioners that Dangote Cement has failed to offer employment to indigenes of Obajana and surrounding communities.

Dangote is quite capable of defending itself; but, other Nigerians better intervene before this matter results in consequences beyond anybody’s imagination. Here are the reasons for this alarm before the calamities befall us.

My take on this

To me the Governor of Kogi State is the one failing to provide leadership. The Nigerian constitution currently being operated has created emperors instead of Governors as we have come to know in other democracies.

That is why a state Governor can order the demolition of a building on suspicion that it is being used for illegal purposes or was built on drainage system – without a court judgement. No America Governor would presume to have such powers. Since this is the first part in this series, I will like the reader to go away with  two questions  in mind. Given two agreements between the parties on  30th  July 2002 and 14th  February 2003 – which Dangote is supposed to have violated – the question remains: why wait till now – 19 and 20 years after – to complain?  And why is Kogi State taking the law into its own hands – inviting anarchy?