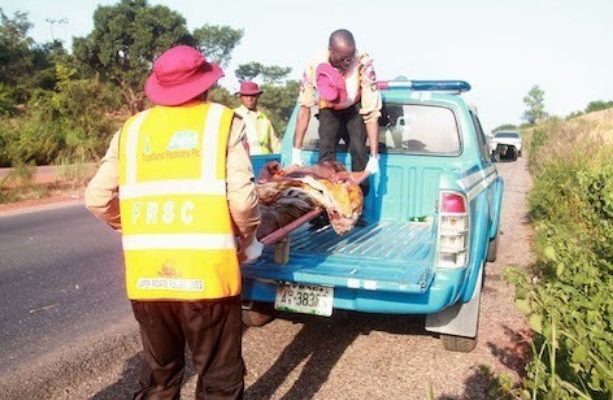 No fewer than five people died and three others injured in an auto-crash that occurred in Kogi on Sunday, according to Mr Stephen Dawulung, Kogi Sector Commander of the Federal Road Safety Corps (FRSC).

Dawulung, who described the incident as “very unfortunate,” told the News Agency of Nigeria (NAN) in Lokoja on Sunday that the auto crash occurred at Ogbagbo junction along the Ejule-Ochadamu road at about 12.47 p.m. when a Nissan car collided with a Mazda car.

The sector commander explained that the Nissan car had lost control while trying to avoid a pothole as it veered off its lane and collided with the on coming Mazda 323 car.

“Our personnel, who rushed to the scene after a distress call, rescued the four injured and rushed them to Enemona Hospital, Ejule in Ofu Local Government Area of Kogi, where the fifth person died while receiving medical treatment.

“The corpses of the five dead passengers have been deposited at Morgue of the same Enemona Hospital, Ejule.

“The obstructions resulting from the crash were immediately cleared from the road by our officers to allow free flow of traffic,” he said.

The FRSC Commander said that the cause of the crash was over speeding and bad road.

He advised motorists to maintain strict adherence to stipulated speed limits and the use of common Sense speed limits by slowing down in built up areas and bad portions of the road.

While condoling families of the victims, Dawulung called on the Federal Government to look into means of repairing the highways most of which he said were riddled with potholes.