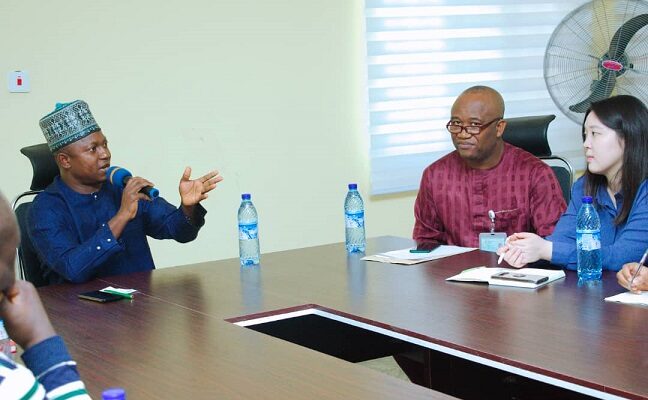 …as Dr. Ogbo describes Williams Charles as a thorough breed

Kogi State Polytechnic and its immediate neighbour, Nigeria-Korea Friendship Institute of Vocational and Advanced Technology (NKFI) Lokoja have reeled out plans to deepen its collaboration on areas of benefiting interests.

According to the Rector, Kogi State Polytechnic, Dr. Salisu Ogbo Usman during a working visit by management of NKFI and a delegation from the Korean International Corporation Agency (KOICA), he noted that both institutions would synergize for mutual benefits to staff and students.

The Rector stated that both institutes would partner in the area of Industrial placement for its electrical and mechanical engineering students, adding that both institutions were open to exchange of knowledge and transfer of technology between the academic staff

Dr. Ogbo noted that KSP lecturers were readily available to collaborate with its NKFI counterparts, while he appealed to KOICA to render support by donating equipment to the Polytechnic.

The Polytechnic Rector used the opportunity to thank the Korean Agency for extending to him an invite for its 2022 Open Day reception, acknowledging that the diverse cultural experiences comprising the dance, dresses and food gave him a soothing feeling.

He similarly extolled the virtues of the NKFI Rector, Mr. Charles Williams, describing him as a very diligent, thorough breed academic who until his appointment was serving a second tenure as the Head of Department, Industrial Design and secured full  accreditation for the department, scoring 100%.

He said he has no doubt that he would replicate the same feat and more at NKFI and lead the institute to an enviable height beyond its current status.

While giving the vote of thanks , the Deputy Rector , Dr. Lamidi Kehinde thanked the visitors for coming and assured that the Rector NKFI, who is also their colleague would make NKFI and KSP proud.