Home News Admiral Ibrahim Ogohi and His Exemplary Leadership, Even in Retirement 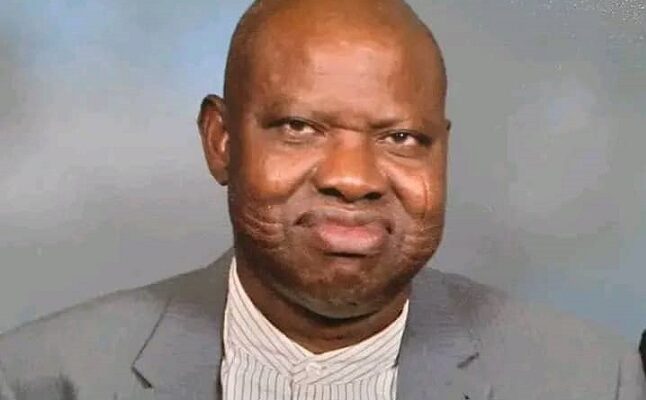 Admiral Ibrahim Ogohi and His Exemplary Leadership, Even in Retirement

Admiral Ibrahim Ogohi (rtd) was a former Nigerian Chief of Defense Staff who embodies the integrity expected of a military personnel.

He, as a military officer, is a good man, a visionary leader has been described by many as General’s General who strongly believed that leadership is all about solving problems. He believes that no nation can overcome the plethora of problems confronting it and its people, no matter how endowed, without a few good men who are visiting leaders playing their part in different field of human endeavours.

He has consistently displayed this leadership philosophy of his, both when he lead the Nigerian Naval Force and even today in retirement.

He has shown, through his attitude even in retirement, that once a navy, always a navy mentality which encapsulates discipline, hard work and above all love for the country by always putting the interests of the country above his personal ambitions.

In writing about this man, a humble and unassuming leader, it is important to gaze at the great Plato’s allegory of the metal which classified men into gold, silver and lead. It is today, with all sense of responsibility, that many has come to classify Admiral Ibrahim Ogohi as an exceptional leader made of pure gold.

A General of many higher standard who is familiar with the pains of those he leads and is deeply compassionate, he came into the military with a clear love of the institution. He saw and conquered that even in retirement, he is still adulated and revered for his exceptional quality of still being an ambassador for the military institution. This is because he was an officer who worked his way consistently to the pinnacle of his military career and was trusted with high responsibilities. Those he came in contact with during the performance of this responsibilities testified to his great mind and altruistic nature.

He understood early in life through the lessons he learnt from his father that “all work is honourable and always do your best because someone is watching”. This philosophy has inspired many young men and women aspiring for leadership positions. He is today in retirement sharing this detailed experience he had in the service of the country with the coming generation of emerging leaders. He just wanted to be remembered as a military officer who gave his all to the service of his fatherland.

He has a doctrine that believes every leader should have a doctrine guiding his operations. Admiral Ibrahim Ogohi’s doctrine is that of diplomacy. He believes a leader should also have a clear objective, a sufficiently dominant life persuasions and an exit strategy. His exit strategy is to live a life of quietness while also by personal examples impacting life’s leadership lessons to the future generations.

He is different because as is seen today with many retired senior military officers dabbling into politics, he displayed his exceptionality by his reluctance to see military instincts used in solving political problems. This is because he has this when you break it, you use it philosophy and because of this exceptionality. He has won the gratitude of the people who see him as a hero.

Admiral Ibrahim Ogohi is a leader who still practice the military’s first general order; the mission is primary, follow by taking care of your soldiers, don’t stand there, do something, lead by example. Never forget you are a soldier, you are the best. No wonder even in retirement, he is still the best. A General who is always loyal to his country. His idea of loyalty he always aptly displays. When he is debating an issue, loyalty means giving his honest opinion, whether he thinks you like it or not. Disagreements at that stage stimulates him but once a decision is made, the debates ends and from that point on, loyalty means to him executing the decision. To him, trust is key in leadership.

Today, Admiral Ibrahim Ogohi is everything to be admired in a leader. A military man of conscience, courage and honesty, erudition, loyalty and gentlemanly demeanour. Many of his peers see him as a mentor, a friend and role model. For all he has accomplished, he remained gracious, kind and humble. He is today rededicated and committed to our national strength and security. He has even in retirement continued to teach and inspire many on what I called his 13 miles of leadership;

*It ain’t as bad as you think.It would look better in the morning.

*Get mad then get over it.

*Be careful what you choose.You may get it.

*Don’t let adverse facts stands on the way of a good decision.

*Have a vision. Be demanding.

*Don’t take counsel of your fears or naysayers.

*Perpetual optimism is a force multiplier.

This are some of his witnessed leadership doctrines and philosophies that has transpired into the success story he is today. This is also to say that his life discusses his leadership philosophies He believes also that leaders should see the people stops bringing problems to them as the day they stopped being leaders. He sees leadership as not about him but about us.

Discretion was a better part of valour to him. His decision to stay out of political contestations has cemented his legacies as a man who put his country above personal ambitions and this is part of his credibility. He is even in retirement serving our country and blazing a trail for generations to come. His leadership in his own small corner strengthens our country and his life embodies the Nigerian dream. He owns the hopes, aspirations and problems of many. He owns them all because he is solving them. A man rewarded for his caution-when he used it.