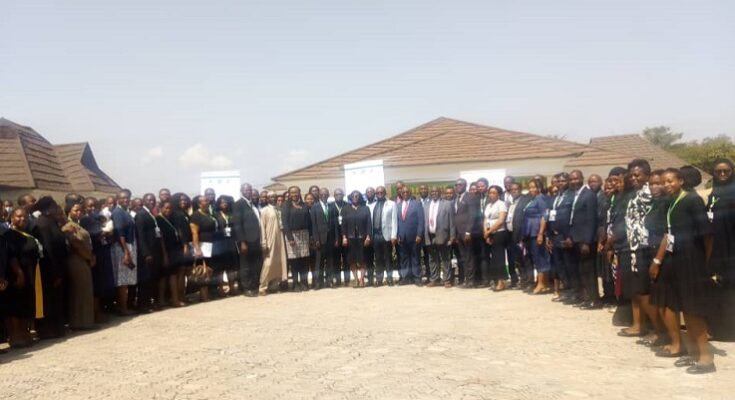 The Kogi State Office of the Public Defender and Citizens’ Rights Commission (PDCRC) has collaborated with the Attorney General Alliance – Africa (AGA -Africa) to train 200 law officers on ”Oral Advocacy and Electronic Evidence in Criminal Prosecution and Defence”, in the state.

Declaring the workshop open in Lokoja, Governor Yahaya Bello of Kogi, restated his Administration’s commitment to continue to partner with organisations and relevant stakeholders in promoting rule of law and human rights’ protection in the state.

Bello, who was represented by the Secretary to the State Government (SSG), Dr Folashade Ayooade, described the training as ‘all important’ one in ensuring speedy and effective administration of Justice in the state.

The governor appreciated the AGA-AFRICA for the continuous support inform of training and workshop being provided in the Justice sector of the state through PDCRC.

He said his administration had made tremendous achievements in the justice sector with an improved legal frame work.

”On assumption of office, as the Executive Governor of Kogi State, we approved the employment of 150 lawyers as a bid to ensure speedy access to justice.

”Today, Kogi has the highest number of lawyers in its civil service among the 19 States of Northern Nigeria,” Bello said.

The governor stressed his determination to ensure speedy administration of justice as well as protection and protection of human rights especially provision of free legal services for the vulnerable citizens through the PDCRC.

The governor commended the PDCRC DG for ensuring that the commission remained the watchdog in ensuring promotion and protection of human rights of the residents of the state.

Earlier, the Country Representative of AGA-Africa, Chief Anthony Idige, SAN, said the two-day training was in collaboration with Kogi Ministry of Justice, and Kogi State Office of the Public Defender and Citizens Rights Commission (PDCRC).

Idige, who was represented by the Coordinator AGA-Africa, Ebelechukwu Enedah, stressed the importance of electronic evidence as the world continue to advance technologically, and reliant society, adding that the use of technology to commit a crime was also increasing.

Idigie said that digital evidence remained a fundamental part of successful and effective investigations and prosecutions of crime.

He added that it enables investigations, by revealing vital information about crimes committed; movement of suspects; and criminal associates, among other factors.

“Indeed, Section 84 of the Evidence Act, 2011 provides for the admissibility of documents generated from a computer and the conditions that must be fulfilled for electronic evidence to be admitted; playing a fundamental role in backing the revolutionary decisions by yourselves to embrace electronic evidence, and moving you towards a future where electronic evidence will be commonplace.

“However, the admissibility of this evidence will be greatly determined by how persuasively and accurately you can put across your argument, whilst showing the relevancy of the evidence that you are presenting to the court. Your argument should further be expressed eloquently and clearly.

“This training is therefore important as it provides us with a chance to discuss the issues that can arise about electronic evidence; and the need to formulate and adopt strategies that can address these issues,” Idigie said.

He stressed that the seminar would provide a chance to discuss issues arising about electronic evidence; and the need to formulate and adopt strategies to addressing them.

The country representative commended Kogi Government for partnering with AGA -Africa, saying, ”this is about the third time the state would  host AGA -Africa Programmes”.

Speaking with journalists in her own capacity,  Enedah, said the theme of the workshop was very apt following the increase in technological advancement.

The AGA-Africa Coordinator described oral advocacy as the way the lawyers present their cases in court and the admissibility of the electronic which hitherto was not known to the court.

She said the training would provide a chance to look at best practices about electronic evidence as well as oral advocacy in criminal prosecution and defence.

Enedah stressed that the training would enable lawyers to understand the right way to present and defend their cases in court either in criminal prosecution or defence.

”At the end of the two-day seminar, we want to see lawyers that have had their tools sharpened and equipped to deal with their cases in court,” Enedah said.

She, therefore, urged the participants to take the advantage of this training to broaden their knowledge.

The AG, who was represented by Kogi Solicitor General and permanent Secretary, Ministry of Justice, Habib Abdullahi said the issue of fundamental human rights of residents and citizens of Kogi State, remained a great concern to the government.

The attorney general assured state government’s commitment to continue to ensure that the citizens and residents of the state have access to justice.

On his part, the Director General of PDCRC, Barr. Abdullahi Zakari, said the workshop would produce a better-informed set of lawyers, vast and prepared to do very well in the act of criminal prosecution and defence.

The DG said the participants would stepdown the training to others lawyers who were not privileged to attend the training, describing it as a continuous legal education in series.

Zakari urged the participants to take advantage of the training and use its benefit to impact on their job, be more professional, diligent and deliver to meet the objectives of their various organisations.

The two-day workshop featured Legal Experts and Resource Persons from national, regional and International organisations from USA, Kenya, Malawi, among others.