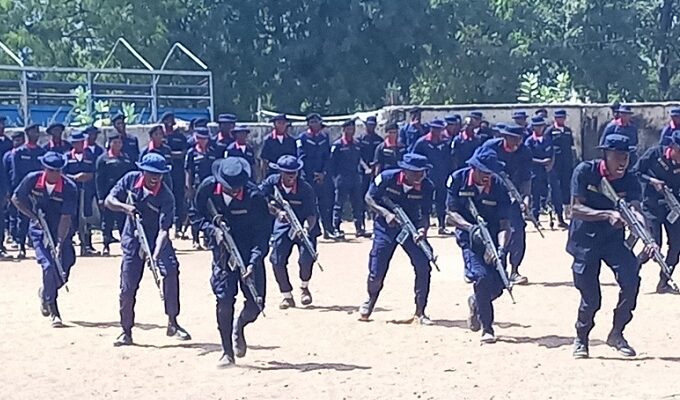 He charged them to be of good professional conduct.

Speaking during the passing out parade of the twenty twenty-two, course zero, seven weapon handling by the twenty nineteen intake of the Corps in Lokoja, Oyinloye said the new personnel were engaged with the months of intensive training.

According to him, they are also expected to live up to the core mandate of  the Corps serving the nation with honour, discipline and patriotism.

The NSCDC Commandant expressed appreciation to the Nigerian Army for its support in training the personnel as well as other sister agencies for their continued synergy with the Command.

In a message to the occasion, Governor Yahaya Bello assured of the State Government’s continued support to security agencies in to achieve set goals.

Governor Bello urged them to be good ambassadors of the Corps and not abuse the privilege given them and serve the nation diligently.

In their separate remarks, representatives of the Army, Navy, DSS, NDLEA, Immigration and FRSC advised the graduands in Arms combat of the Corps to abide by the rules of engagement by putting the lesson gained to effective use on the field.

In his remark, Head of Training Department, in the Corps, Assistant Commandant of Corps, Fasakin Adebayo Olukunle said the officers and men have been rigorously drilled to conform to arms training exercise with international best practices.

Speaking on behalf of the graduands, Assistant Superintendent Of Corps, Yahaya Abubakar Mohammed promised that they will make effective use of the training received.

Highlights of the programme were parade, silent drill, extension parade, stripling and assembling of rifle amongst others as well as presentation of certificates to the graduands.