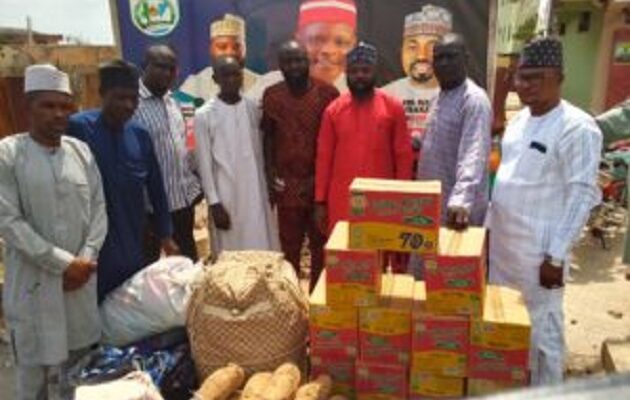 The Lokoja/Kogi Federal Constituency candidate, Hon Abdullahi Idris Turaki and the Lokoja 1 State Constituency flagbearer, Hon Henry Francis Folaranmi of the New Nigerian People’s Party, (NNPP), on Friday visited flood victims at Wards A, B and E in Lokoja local government area and donated some relief materials to cushion the effects on them.

Items donated to the victims by the visiting candidates included tubers of yams, bags of garri, rice, salt, sugar, noodles, spaghetti, vegetable oil, as well as toiletries and textile materials.

Speaking during their visit, the NNPP candidates urged politicians and well meaning individuals to put politics aside irrespective of their political affiliation and render help to the flood victims who were visibly suffering.

They said the gesture was to ameliorate the sufferings of the people and those that lost their family members as well as properties to the disaster.

According to them, those that were seriously affected, especially those with broken fences, houses and roofing, and those affected in their farms would be supported.

The NNPN candidates, who were flanked by members of the party, also called on the Federal ànd Kogi State governments to immediately put in measures that would mitigate the perennial flood as well as its effect on the people.

They lamented the damage the flood had caused especially in Lokoja and Kogi local government areas submitting that “it is most pathetic.”

They promised to extend same gesture to other affected communities in Lokoja/Kogi Federal Constituency.

Receiving the relief materials on behalf of the victims, Alhaji Muhammed Isa, appreciated the NNPN candidates for the gesture just as he further beckoned on the federal and state governments to come to their rescue.

Isa remarked, “We need help from them. We need rescue now. You can see my people, they are here.”