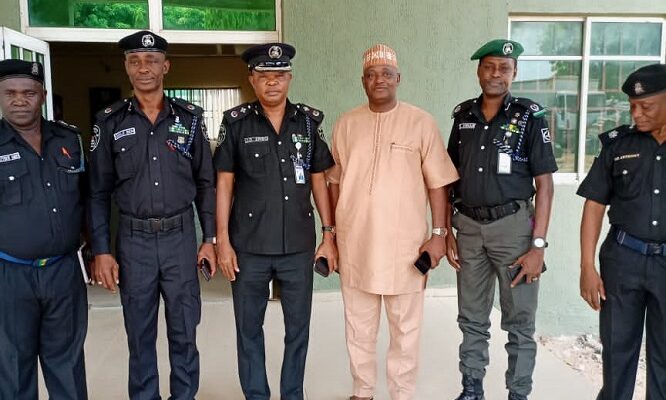 A delegation of Kogi State Police Command led by the Deputy Commissioner of Police, Mr J.O. Eribo, has paid a assessment visit to the state office of the Independent National Electoral Commission (INEC) in Lokoja on Tuesday to assess level of police presence at the Commission’s state Headquarters.

This is sequel to the request by the Commission to the police to beef up security for the electoral commission and its staff in the face of recent security threats INEC’s properties and staff across the country as some offices and staff of INEC in some states have come under attacks.

According to a statement by the head of voter education and publicity, Alhaji Haruna Sule, “the team of Police top hierarchy in the state, which comprised of the Area commander, Lokoja area command, and the commander PMF37 Mobile unit, met with the Head of General Administration and procurement, INEC, Mr. Yahaya Abisabo, who received the Police delegation on behalf of the state INEC Resident Electoral Commissioner, Dr Hale Gabriel Longpet.”

DCP Eribo intimated the HoD, General administration and procurement, GAP that the unscheduled visit was part of police routine to beef up security at the Commission’s office during elections as INEC had written to the police soliciting the state police command scale up security surveillance on the Commission in the state office and the 21 LGA INEC offices, as well as the formalization and subsequent replacement of the REC’s orderly.

Eribo, reassured the commission that in the coming days, the command would deploy armed mobile policemen to the state office to protect the premises and personnels.

INEC thanked the police for the visit and called for greater collaboration between INEC and the police for election security towards seamless election operations in the state. the inter-agency security consultative Committee on election is headed by the Nigeria Police.