Home News Kogi Govt Hands Over Sites for Construction of Senate Building, Faculty of Medicine, Others at CUSTECH 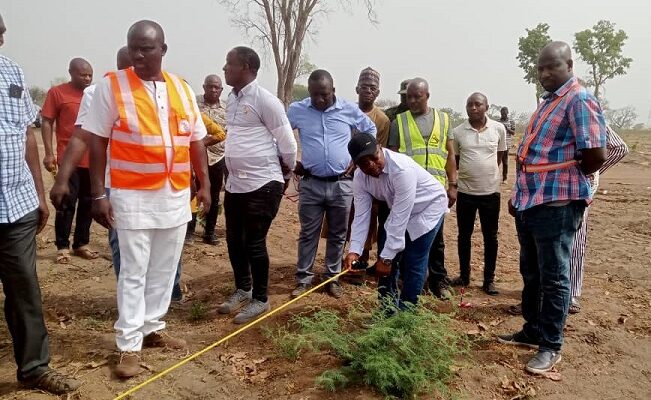 Kogi Govt Hands Over Sites for Construction of Senate Building, Faculty of Medicine, Others at CUSTECH

Kogi state government has handed over seven project sites to contractors at the Confluence University of Science and Technology (CUSTECH), Osara, with the promise to make the university a world class citadel of learning.

The State Commissioner for Works and Housing, Engr. Abubakar Ohere, who handed over the sites on behalf of the state government, expressed optimism that the projects has a hundred percent of funding.

The project sites are for six faculties and the senate building.

The faculties are for the building of a laboratory, library, school of medicine, faculty of information technology amongst others.

Engr. Ohere assured that once the issue of technicalities are resolved, the projects will commence in earnest, pointing out that the construction work would witness speedy completion and would meet the required ‘GYB Standard’.

He expressed confidence that the quality of work would meet with the quality and level of deployment of the infrastructure already at the University.

He pointed out that the Governor has proven to be a rare gem and a national leader.

Earlier in his remarks, Engr. Kabiru Suleiman, the consultant on the project, said efforts would be made to sustain the narrative of maintaining the GYB standard in the seven projects, just like the civic center in Lokoja and other landmark projects in the state.

Engr. Suleiman described education as the live wire of developing nation, assuring of frequent visits to all the seven projects towards ensuring that CUSTECH becomes a world standard citadel for learning.

In their separate remarks, the MD of 2,7,8 Nig. Ltd. Engr Subayeru Ibrahim and the MD Musalib Nig. Ltd expressed their willingness to deliver the project on schedule, pointing out this is the first time they would be embarking on a project that is fully funded before commencement.

The contractors described it as a measure that underscores Gov. Bello’s commitment to quality and early completion of the work.