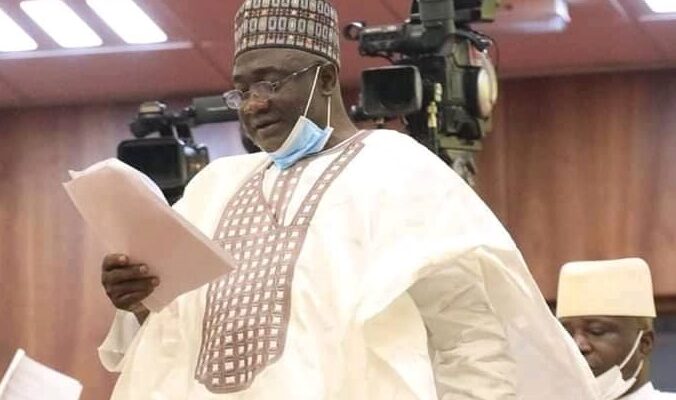 The senator representing Kogi East in the National Assembly, Jibrin Isah Echocho, has described his recent campaign tour of the three Local Government Areas in Ankpa Federal Constituency ahead of the February 25th Senatorial election as a huge success.

The electorate in the Federal Constituency, he said, were so elated that they have pledged to vote overwhelmingly for him and the other APC candidates at the upcoming general elections.

“Echocho’s achievements are all over in the public domain, and the people of Kogi East are prepared to say thank you Echocho on the 25th of February 2023.”

He, however, described as a distraction, some of the social media fake news and misinformation being peddled by his opponents who are having an uphill task trying to convince the people who have seen, felt and enjoyed real dividends of democracy.

While making reference to a social media fake news titled “Senator Jibrin Isah A. K. A. Echocho Disgraced in Ankpa Local Government’, Senator Jibrin said he is too busy to be distracted now that his achievements are being appreciated by the people of Kogi East.

A statement from his campaign council signed by Ojoachele Christian said, “While we consider the subject article laughable, we are compelled to respond to ensure that the reading public is not misled.

“Senator Jibrin Isah undertook a tour of the 3 Local Government Areas in Ankpa Federal Constituency in the company of the Deputy Governor of Kogi State, His Excellency Chief Edward Onoja, the Deputy Speaker of Kogi State House of Assembly, who is also the Director General of the Campaign Council for Kogi East, Hon. Rabiu Alfa, the respective Local Government Executive Chairmen and Party Chairmen, as well as various other stakeholders.

“Omala was the first port of call on Tuesday, followed by Olamaboro on Wednesday, and Ankpa on Thursday. The people in the three Local Government Areas were full of commendations for Echocho, for his milestone achievements, ranging from sponsoring of bills, motions, to infrastructural developments, and various empowerment programs.

“With specific reference to Ankpa Local Government Area, when the programme ended, Echocho headed to his vehicle after exchanging pleasantries with the very excited audience. When he sat down in his vehicle, he noticed that a young man was trying to reach out to him but was blocked, and had no choice than to hit Echocho’s vehicle for attention. Echocho decided to come out of the vehicle to address the young man, but he was equally being blocked. Echocho asked for the identity of the young man, who was obviously looking for favour. The senator has since promised to assist the young man.

“The incident had no bearing with the misinformation being peddled by the author who can be best described as an artful fiction writer.

“We have traced the said article to Victor Alewo Adoji and his co-dreamers. Adoji is drowning and looking for whatever he can hold on to whip public sentiments. We try as much as possible to ignore him, but silence may not be golden all the times.

On the issue of use and dump, Ojoachele said “Echocho has built many people in Kogi East, right back in his days in the banking industry, to his various interventions in Kogi East as the Senator representing the district.

“With regards to who succeeds His Excellency, Alhaji Yahaya Adoza Bello, it is equally misleading to say Echocho has adopted His Excellency, the Deputy Governor of Kogi State. Echocho is prepared to work for whoever emerges as the party’s flag bearer in the upcoming primary election.

“We strongly advise Victor Adoji to stop ridiculing himself in the public space by manufacturing stories to suit his purpose, and mislead the reading public.

“Adoji should go and market himself to the electorate. But he seem to have nothing to offer, and has been openly rejected by his party, while trying unsuccessfully to penetrate the APC through his woman friend

“While Victor is busy entertaining himself on the social media, Echocho is busy visiting the electorate, informing them on his plans for them in his second tenure, God willing.”

Spread the love
Tweet
Previous PostTime to Make or Mar Your Future; Kogi Central in Focus Next PostSolomon-Adesanya, Politician Who Fled Kogi in 2019 Yet to Return, Says Family