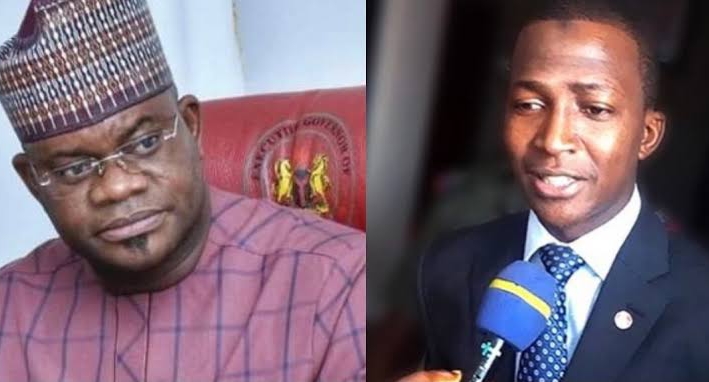 Former President of the Nigerian Bar Association (NBA), Dr Olisa Agbakoba, SAN, has lambasted the Economic and Financial Crimes Commission over what he described as unwarranted media trial of the Kogi State Government as regards the fresh case against a nephew of the Governor and the previous N20 billion bail-out controversy.

Agbakoba, who spoke at a press conference on “The Rule of Law in Nigeria Today”, held in Lagos on Sunday, specifically noted that the EFCC was turning itself into a one-man Robin Hood riot gang, which must not be allowed.

According to him, how a state spends its money should not be the business of the anti-graft agency.

While accusing the EFCC of impunity, he said that assuming it was the Commission’s business to inquire how the state spends its money, would it still be its lawful business to investigate it?

Agbakoba made his opinion known just as he called on all the 18 candidates contesting in next year’s presidential election to clearly state their commitments to the rule of law and the war against corruption.

“The EFCC for example plays a very strong role in the anti-corruption strategy of Nigeria but they are also one of the institutions most guilty of breaking the rule of law,” he said, stressing that candidates must make commitments to Nigerians to sack any government official who violates the rule of law, deliberately disobeys court orders or engages in media trials.

According to the former NBA President, the Supreme Court recently said in one of its judgments that the EFCC could not be a jack of all trades and that they should concentrate on what the law empowers them to do under Section 46 of their Act.

He said, “Like the current trending case where the EFCC arrested some people in Kogi State on allegations of money laundering, I believe that case should not be the business of the EFCC, at all. Is it their business how Kogi spends their money? Even if it is their business, is it their lawful business to make that enquiry?

“The Supreme Court has recently said in one of its judgments that the EFCC cannot be a jack of all trades and that they should concentrate on what the law empowers them to do under Section 46 of their Act.

“It is not the duty of the EFCC to be chasing the Kogi State Government and threatening to storm the State House to seize documents or harass the Accountant-General of the state.

“What the EFCC is currently doing is turning itself into a one-man Robin Hood riot gang. That must not be allowed and that is the impunity that I refer to.

“If I were the lawyer to the Kogi State Government, what I would do is to go to court and tell the court that as a result of the Supreme Court judgment, the EFCC does not have the power to demand that we should provide documents or give them our accounting books.

“If we have lost money, we are the ones to complain and if we are not complaining or we are complicit in any fraud, then the appropriate agency to handle it is the ICPC or the state House of Assembly.

“So the candidate (2023 election candidates) must tell us what they are going to do with all these agencies because we need to know if they are going to allow the EFCC to continue to engage in media trials and carry on as the attack dog of the Federal Government against other arms and levels of governments.”

On the 2023 election, Agbakoba noted that, although some of the candidates had released their manifestoes, their positions on how they would tackle corruption and also relate with the various anti-corruption agencies were not well spelt out.

He said the present state of the rule of law in Nigeria was very precarious and the country needed a revolution to make it the bedrock of governance.

According to him, the reason the stand of the candidates must be known is that most of the investigating agencies have abandoned their duties to the EFCC.

He said, “It is a big problem because it appears as if it is nobody’s job and the EFCC has somehow taken over the responsibility of all other agencies, thereby overreaching itself.

“I believe that the EFCC is overburdened with too much responsibility. I recently saw the EFCC Chairman, Bawa on television saying that the Commission is auctioning forfeited properties seized from convicted criminals, which should not be his job.

“I challenge anybody to tell me anywhere in the world that an agency with the same functions as that of the EFCC does three distinct jobs of investigation, prosecution and disposal of seized or recovered assets.

“I believe what the EFCC should do is to face investigation, as is done by similar agencies around the world. The commission is not an agency that is capable of effectively prosecuting cases. This is the reason they do not win most of their cases in court.

“I will strongly recommend that the prosecutorial power of the EFCC should be transferred to a new National Prosecution Agency. The Department of Public Prosecution in the Federal Ministry of Justice could be carved out and made independent to perform this role.”

“We also need a new body that will deal with recovered assets and other proceeds of crime so that the EFCC can face its primary function of investigating financial and economic crimes,” Agbakoba added.