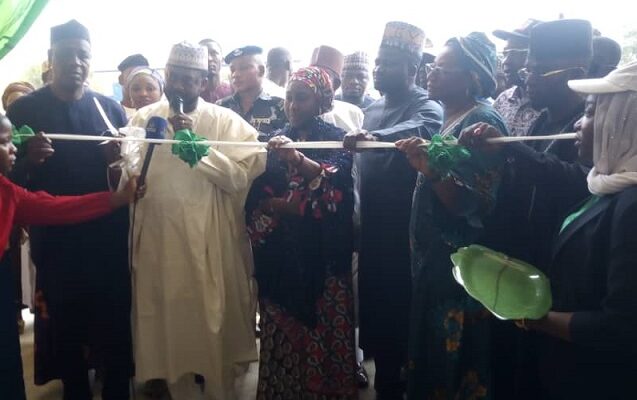 The commissioning was part of activities for the three-day Technical Implementation Support visit to VDCP projects in Kogi by President Muhammadu Buhari’s daughter, Hajia Fatima Buhari.

The News Agency of Nigeria (NAN) reports that Fatima Buhari, who is the Marketing Enterprise Development Advisor (MEDA) of FGN/IFAD-VCDP, had on Tuesday visited another Rice Processing Centre in ASCO Camp in Ajaokuta LGA of Kogi.

In his remarks, Bello commended the federal government for partnering with the State Government in empowering rural farmers and adding value to their products to increase their net revenue.

The Governor, who was represented by his deputy, Dr Edward Onoja, reaffirmed the commitment of his administration to continue to invest in agriculture for economic diversification.

He enjoined the beneficiaries to take ownership of the rice processing centre and ensure proper maintenance for their own benefits.

He assured that government would continue to add values to the rural farmers through various projects and programmes, adding that four different agricultural programmes were going on concurrently in the state.

Speaking, Hajia Fatima Buhari, said she was highly impressed with what the state government was doing to support the VCDP projects in the state especially the counterparts funding.

“This is the first time in all the States we have all our projects, that VCDP will be given two years counterpart funding which has never happened before.

Earlier, the state’s Commissioner for Finance, Budget and Planning, Mr Asiwaju Idris, said Kogi was among the first State to sign the MoU for the VCDP project in 2017 with immediate payment of its counterpart funding.

He added that the governor had also given the approval for the payment of the counterparts fund for 2022 and 2023.

The state’s Commissioner for Agriculture, Mr David Apeh, commended the governor for his commitment to the VCDP project, saying it had impacted posively in the lives of the rural farmers in the state.

Earlier, the Kogi State Coordinator, IFAD-VCDP, Dr Stella Adejoh, noted that the visit of the President’s daughter, would further strengthen the farmers’ trust in the programme thereby enhancing their commitment.

She expressed her delight with the feedback from the August visitor, saying it was an excellent one which had put Kogi on the limelight for the world to see.

“There is real hope for the farmers for sustainability of the program, because we have done a whole lot of capacity building along the value chain,” she said.

Two farmers, Halima Gimba, a Processor and Secretary of Kaskiya Cluster; and Hajia Lari Sule, a Marketer, who spoke on behalf of the beneficiaries, said they had benefitted immensely from the VCDP project.

According to them, VCDP had taught them best modern way of processing rice, acquired leadership and management skills, market their products online, among others.