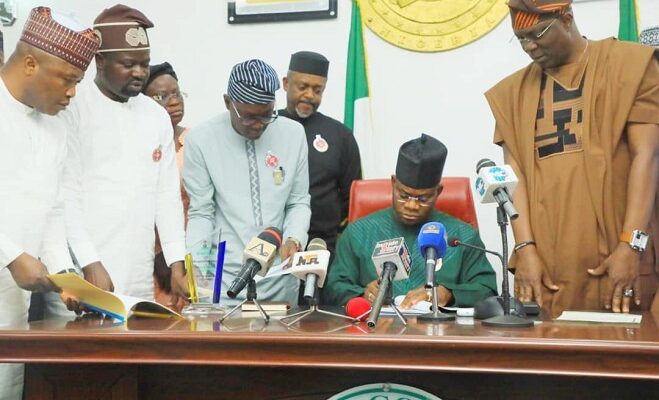 During the event at the exco hall, Lugard House, Lokoja, Governor Bello thanked members and staff of the Kogi State House of Assembly for their patriotism and service to their fatherland.

The Governor stated that the synergy between the three arms of government in the state will continue as it has yielded positive results which are evident in the smooth running of government and implementation of projects and programmes.

He said his administration will continue to foster unity amongst the three arms of government for the smooth implementation of the government’s policies and programmes.

He assured the Assembly that his administration will ensure full implementation of the budget in line with available resources.

The Speaker, Kogi State House of Assembly Rt Hon Mathew Kolawole hailed the governor for his commitment and support to the House of Assembly over the years, while noting that the current assembly has been flourishing tremendously in its legislative businesses with the support of the executive.

He congratulated the governor on behalf of the State Assembly for the execution of numerous projects across the state including the Reference Hospital, Okene and others commissioned by President Muhammadu Buhari on Thursday.

In his remarks, the State’s Commissioner for Finance, Budget and Economic Planning, Asiwaju Idris Asiru commended the governor for his transparency and accountability in the implementation of people’s oriented programmes.

Asiru thanked the legislature for being meticulous in scrutinizing the budget.

Spread the love
Tweet
Previous PostOkene Explosion: CHRCR Calls for Independent Investigation Next PostBuhari's Visit: Ohinoyi of Ebira Complains of Being Shut Out, Didn't Delegate Anyone to Represent Him