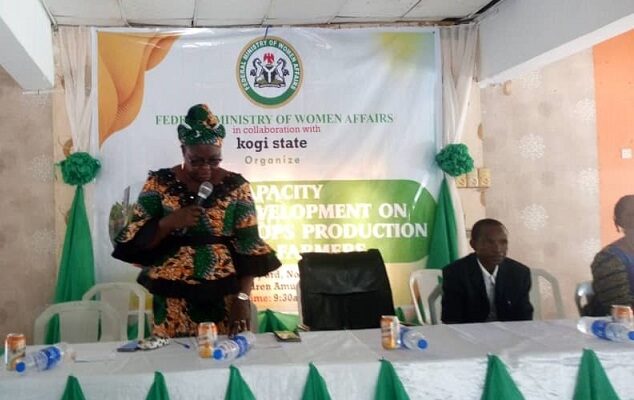 The Federal Ministry of Women Affairs and Social Development (FMWASD) in collaboration with Kogi State Government, have trained rural farmers in the state on best agronomic practices for maximum yield.

Speaking at the training centre on Thursday in Lokoja, the Minister of Women Affairs and Social Development, Mrs Pauline Tallen, said the training was part of various ways through which the Ministry was taking women out of poverty and empowering them.

Represented by Mr Kamal Yusuf, the Procurement Specialist in the ministry, the minister said the emphasis was on getting the right skills on the products, relevant to the production of rice, cassava and cashew as well as easy access to market.

She noted that the federal government in collaboration with the state ministry of women affairs, had in June 2022, distributed Agricultural inputs including improved seeds to farmers in the state.

According to her, the inputs include: rice, beans, groundnut, maize, super grow (liquid fertilizer) and sprayer, wheelbarrows, among others.

She said the training would be based on the best Agronomic practices for Optimal yield, food security and economic sustainability for Kogi rural farmer in cassava, rice and cashew production.

She advised participants to maximise the opportunity to get the best out of the training so as to cascade what they would at the grassroots.

Earlier, the state Commissioner for Women Affairs and Social Development, Hajia Fatima Buba, commended the federal government for the capacity building, saying it would add to the participants’ knowledge on crops’ farming and alleviate poverty among women.

Buba, who was represented by the Permanent Secretary of the ministry, Mrs Modupe Andi, said the aim was to transform small holder Agriculture into successful and profitable rural agric business in which Agricultural surpluses could be marketed.

”Globally, women farmers suffer poor access to various kinds of production resources and services, most importantly access to inputs, extension and market services which is an important cause of their low productivity.

”It is in view of this that Government at all levels are putting up strategies to encourage farmers especially women farmers,” she said.

She stressed that the federal and state governments were encouraging the shift to farming in order to improve the Nigerian economy.

She thanked the state’s Governor, Alhaji Yahaya Bello, for developing numerous Agricultural schemes for women farmers in the state.

She urged the participants to key into the best agronomic practices so as to enhance their crop production for maximum yield.

One of the participants, Haji Sufiat Yahaya, the State Coordinator, Small Scale Women Farmers Organisation of Nigeria (SSWFON), thanked the government for training describing it as timely.

The resource person made a paper presentation on ”Best Agronomic Practices for Optimal Yield, Food Security and Economic Sustainability for Kogi Rural Farmer in Cassava. Rice and Cashew Production”.