Home News COVID-19: Nigerian Farmers Yet to Recover From Impact of Pandemic 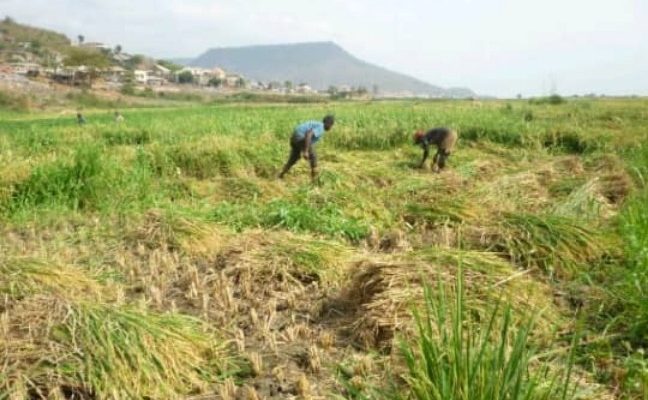 COVID-19: Nigerian Farmers Yet to Recover From Impact of Pandemic

While public attention on the COVID-19 pandemic has decreased, its impact on local farmers persists. Now farmers are struggling against heavy inflation to recover their businesses, attract customers, and regain their lost footing.

La’ah Dauda is the President of the Progressives’ Multi-Purpose Cooperative Society in Zamaru-Kataf. He has been farming since he was a youth, for over 45 years. What was a prosperous business — cultivating maize, soya beans, ginger, yam and guinea corn – has yet to financially recover.

Before the pandemic, Mr. Dauda’s farm was able to make profit, and break even when there were bouts of inadequate rainfall. But when the pandemic broke out, state-mandated movement restrictions meant to limit the spread of COVID-19 also decreased access to farm labour and inputs.

He said,“Suppliers of agro-allied chemicals were restricted, so we didn’t have access to inputs for our farms. Even when we produced, we couldn’t sell them due to restriction of movement.” This phenomenon was common among other farmers interviewed across the country.

Despite eased restrictions on movement, Nigeria’s 19.6% inflation rate – more than double the continent-wide average – is making it harder for farmers to recover their businesses. This is in part because the cost of farm inputs has increased, due to economic pressures and Russia’s invasion of Ukraine. But many farmers – like Mr. Akong Peter, a poultry and fish farmer – found that the market for their commodities dried up, as customers are struggling to afford these items.

This is all happening while hunger is a growing problem in Nigeria and around the world. Data from the ONE Campaign shows that 18 million Nigerians, or 8% of the population, experience acute malnutrition. One in three children in Nigeria faces stunting, which has negative lifetime impacts on their ability to develop normally.

‘I didn’t benefit from COVID-19 palliative’

Early in 2021, the Nigerian government announced a stimulus package designed to benefit more than 8,000 vulnerable small-scale farmers. It includes N391 million from the International Fund for Agricultural Development of the United Nations (IFAD). Farmers were to benefit from climate resilient varieties of seeds, which were expected to help them increase the farm yields. IFAD’s support complements the United Nations Nigeria COVID-19 Basket by earmarking resources to mitigate the impact of the pandemic on smallholders’ farming activities and domestic food supply.

Peter said that in spite of the difficulties experienced during the period the country was on lockdown, he did not benefit from government’s intervention for farmers. “I have always heard of government COVID-19 loans and grants, but neither myself nor any of the farmers I know here have benefited from government’s gestures. I was surprised when we discovered a store loaded with COVID-19 palliatives in my area, but the store was locked up. What was meant to be distributed to the larger population had been hijacked by a rich few.”

In 2020, during the ENDSARS protest, youths identified several stores where palliative goods were kept, broke into them, and distributed the items to protesters.

Agada ThankGod is a young poultry farmer who was excited at the opportunity to get the COVID-19 loan, but discovered he had to pay the sum of N50,000 in exchange for the supposed N400,000 loan. Out of desperation, he consented. Because he made losses as he could not dispose of some of his birds, he had to look for other sources of income to repay the loan.

According to ThankGod, “Even after COVID-19 pandemic, I’ve not recovered from the losses I suffered. I had to abandon my poultry farm, go to Ibadan to join another organization as an employee in order to keep soul and body together.”

Dr Ogah Moses of the Joseph Sarwuan Tarka University, Makurdi is an Agricultural Economist with expertise in farm management.  According to him, the government’s incentives didn’t get to farmers because, “these incentives were hijacked by people that are not farmers.” He argued that politicians may divert funding to secure favours, benefitting farmers or regions who might not need them as badly or at all.

These incentives were hijacked by people that are not farmers

The mediators responsible for negotiating for local farmers may take advantage of their lack of understanding of the policy or eligible benefits. He added that “some farmers of particular religion were well favoured at expense of others. Favouritism and nepotism play a significant role farmers’ lack of access to government incentives.”

What is the way forward?

The university don suggested that in order to support farmers in this dispensation, “incentives should be given to the farmers’ cooperative society directly to be distributed to their members.”

He suggested that these cooperative societies collect a census of farmers who may need support and reach them through local ward or zonal levels to receive the incentives in person. Distributing incentives to farmers in person, not through representatives, could increase transparency and reach more farmers effectively.

First published on The Insight