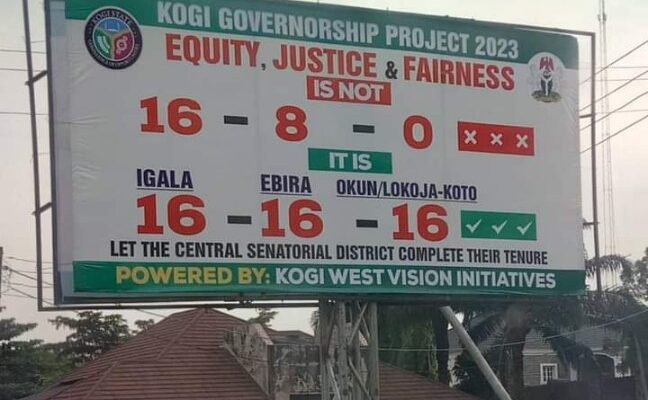 As the Independent National Electoral Commission (INEC) released timetable for November 2023 Kogi governorship election, the agitation for equity and fairness has taken the front burner, once again.

A foremost socio-cultural organization, Okun Development Initiative (ODI) has kicked against a subtle agitation that will deny the Kogi West senatorial district the opportunity to occupy Lugard House in 2024.

The subtle agitation being promoted under the ’16-16-16′ campaign is aimed at supporting the retention of Kogi governorship seat in the central senatorial district after the tenure of incumbent Governor Yahaya Bello. The promoters argued that since the eastern bloc of the state enjoyed 16 years in the number one seat in the state, the central axis where Gov. Bello hails from be allowed to complete its 16 years before power shifts to the west.

However, in a twist of event, a largely unknown group, Kogi West Vision Initiative (KWVI), launched a bold move to support the ’16-16-16′ agitation by erecting a massive billboard in the west to promote the power retention plan.

In a swift reaction, Okun Development Initiative described the move by KWVI as a “comic attempt to stand logic on its head.

ODI stated that making the support look like an agitation by persons from Kogi West is not only laughable but annoying.

“The attention of Okun Development Initiative has been drawn to the agitation of a group named Kogi West Vision Initiative as expressed in a billboard for the Central Senatorial District to complete its tenure.
While Okun Development Initiative wishes to disassociate from this comic attempt to stand logic on it’s head, we condemn in its entirety this shallow attempt to place the interest of some individuals and groups above that of the State.

“One begins to wonder where this pseudo group got its own definition of equity, justice and fairness from.

“If 16 years of Kogi East, eight years of Kogi Central at the expiration of His Excellency, Alhaji Yahaya Bello and Zero years of Kogi West as shown in the 16-8-0 formula is unjust, unequal and unfair according to this group, how then can an additional 8 years for the Central be the correction to a lopsidedness both the Central and West complained about prior to 2015?

“Justice, equity and fairness is 16-8-8 after which Kogites must learn from the mistakes of the past.
It was obvious what the goal was when this absurd logic was first put in public space but to make it look like an agitation by persons from Kogi West is not only laughable but annoying.

“How can any sane individual or group moot such a ridiculous agenda not to talk of propagating the same? No reasonable person or group will ever see the cause of a problem and put forward the same as the solution.

“Our people through our delegates in 2015 gave His Excellency, Alhaji Yahaya Bello the votes that gave him the second position even when delegates from the Central preferred the ‘big names’ The rest of the story is now history.

“In 2019 against all odds, Okun people voted for the reelection of His Excellency, Alhaji Yahaya Bello. The reward for good is good.

“We in Okunland have paid our dues and insist not from the point of entitlement but that of Justice, Equity and Fairness.

“The much talked about ‘Ebigo’ is premised on the recognition of the unique multi ethnic nature of the demography of our state and the need for equity in all spheres of life in the state.

“Okun Development Initiative insists that ‘Ebigo’ is more than a sloganeering mantra and its core values must be implemented for peaceful coexistence.

“For a faceless unregistered group to be this bold and display such arrogant proclivity is a sad testimony of what politics has become.

“Okun Development Initiative hereby restates its commitment to support every effort to actualize the quest for an Okun person to be Governor of the State come January, 2024 irrespective of the warped and insane postulation of certain confused nitwits who don’t know what justice, equity and fairness truly mean.

“Okun Development Initiative believes that Alhaji Yahaya Bello is capable of resisting those putting unnecessary pressure on him to do what is not just,” he said.

Okun Development Initiative reiterated its position that for justice, equity and fairness the next Kogi State Governor must be an Okun person.

Previous PostCOVID-19: Nigerian Farmers Yet to Recover From Impact of Pandemic Next PostGov. Bello Launch Distribution of 11,000 Free Textbooks to Students in Kogi