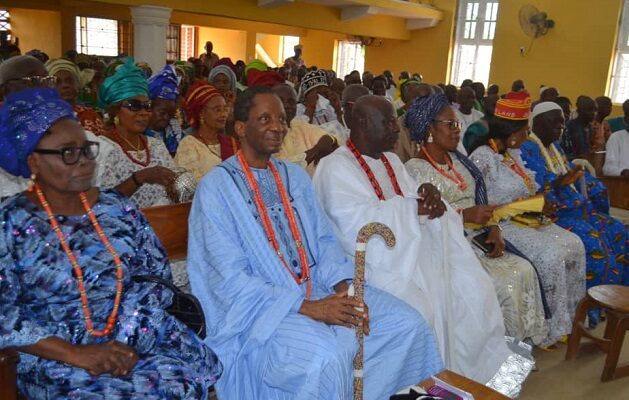 Newly confirmed Baale of Egbe, the commercial nerve of Yagba West Local Government Area, Kogi State, Oba Abiodun Agbana has attributed the thanksgiving he held at 5th ECWA Church, Egbe on Sunday to needs for appreciating God after the protracted litigations that delayed his appointment for seven years.

The Baale of Egbe stool, a Second Class graded, by hierarchy is second in command to the First Class Graded stool of the Elegbe of Egbe and automatic successor to the throne of the Elegbe.

The approval of the appointment of Oba Agbana, former Managing Director, Onward Fishery, Lagos as Baale of Egbe followed the June 22, 2022 judgment by the Kogi State High Court, Kabba, according to a letter to that effect issued by Kogi State Government.

Two other co-contestants for the Baaleship had gone to court to challenge his (Agbana) selection.

Kogi State Governor Alhaji Yahaya Bello in the letter dated July 1, 2022 and signed by the Commissioner for Local Government and Chieftaincy Affairs, Barrister Salami Momodu Ozigi approved the appointment of Oba Agbana as Baale of Egbe.

The appointment letter further stated that the approval was in compliance with the June 22, High Court ruling in Kabba “and in excercise of the power confered on the governor by section 29 of the Kogi State Chiefs (Appointment, Deposition and Establishment Council) Law 2006”.

In his thanksgiving message, Oba Agbana took the congregation who included the Elegbe of Egbe and Chairman, Yagba West Traditional Council, Oba Ayodele Irukera, the Olu of Okeri, Oba JJ Fanope, Managing Director and Chief Executive Officer, First Trust Mortgage Bank Plc, Mr Korede Adedayo, Senatorial Candidate of the All Progressives Congress (APC) for Kogi West Senatorial District, Hon Sunday Karimi and other traditional chiefs down the memory lane recounting how the “long, tedious road to truth and justice” was traversed eventually and declared that the thanksgiving was organised for the purpose of appreciating God that in the end, judgment was entered in his favour.

His words: “I believe we are all aware that it was after the appointment and coronation of His Royal Highness Oba Ayodele Irukera as the Elegbe of Egbe that the position of Baale of Egbe became vacant on 7th May, 2014. The Elegbe was coronated on 11th October 2014, It was also after Elegbe’s request on 15th May, 2015 for a Baale that nomination, selection,  presentation, recommendation and approval of the appointment of a new Baale of Egbe could be carried out. In the course of carrying out the Elegbe’s request for a Baale, four candidates emerged and somehow the court was approached by two of the candidates forcing all of us to wait for the judgments of the court.

“While it is good to resolve or settle disputes outside the court rooms, it is better to go to court than taking the law into our hands because the verdicts of courts are laws.

“In these court cases, it has been judged that my Jehingbogbo Etijakuru family is a ruling family in Apoto and as a member of the family, I am entitled to ascend the stool of Baale of Egbe.

“Also that among the four candidates that vied for the stool, I was the only candidate that was validly nominated, selected, presented, recommended  and traditionally appointed as Baale of  Egbe. I thank God that the court judgments are in my favour and these are the reasons for this thanksgiving”.