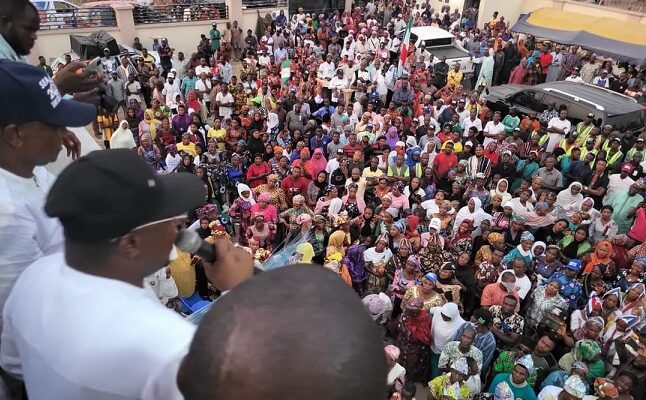 The APC campaign rally on Tuesday, witnessed a massive turnout of mammoth crowd of Ajaokuta residents who trooped out in their numbers to welcome the APC Kogi Central senatorial candidate, Engr Abubakar Ohere and his team.

The Ohere campaign train were earlier received by stakeholders at the Ajaokuta township hall, and also paid courtesy calls to traditional rulers at their various palaces.

Ohere also met with the APC stakeholders at the Ajaokuta residence of Prince Onyekehi, who doubles as the Special Adviser to the Governor on Special Projects and State Focal Person, National Social Investment Programme (Kogi- NSIP)

In his remarks, Ohere appreciated the traditional rulers and APC faithfuls for the show of love by turning out enmasse to receive him in Ajaokuta.

Others were grading and upgrading of Traditional rulers, as well as empowerments of women and youths in agriculture, trades, skils acquisition among others.

He promised to build more on GYB legacies by quality representation and defend the rights of the people of Ajaokuta at the red chamber if elected.

Ohere assured the people of quality legislative representation that would enhance the standard of living and the well-being of the people of Kogi Central.

He, therefore socilited for the support of the people of Ajaokuta and the entire Kogi Central by coming out to vote massively for him and all the APC candidates including Asiwaju Bola Tinubu/Kashim Shettima as President and Vice President respectively.

Speaking, Prince Onyekehi assured the people of Ajaokuta that APC-led administration would do more for them, while appreciating His Excellency, Gov. Yahaya Bello, for the laudable achievements in Ajaokuta LGA.

On their part, the duo of Hon. Abdulraheem Sanni Egidi and Hon. Jibril Abu, APC candidates for Ajaokuta House of Representative and House of Assembly respectively, promised quality and passionate  representation at the green chamber as well as the state Assembly.

The Traditional Rulers in their separate remarks, appreciated the Governor for his love for Ajaokuta people, and reaffirmed their supports for his administration.

The royal fathers commended the governor for the appointment of Ajaokuta sons and daughters in sensitive positions, as well as construction of the general hospital, state employments as well as grading, upgrading and improved welfare for traditional rulers.

The Ohi of Ajaokuta, who doubles as the Chairman of Ajaokuta Traditional Council, assured his visitors of their continuous support for Gov. Bello’s administration, stressing that the Governor meant well for the people of Ajaokuta