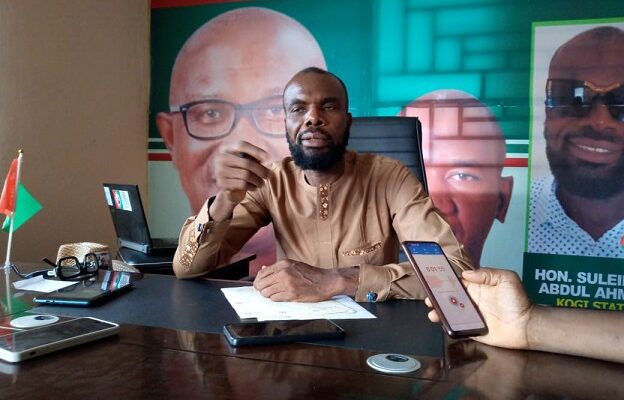 The party accused Kogi State government of stifling the political space for opposition political parties in the state by denying them permit for use of the Lokoja Confluence stadium without official reasons.

The party claimed that the Yahaya Bello-led administration had deployed the use of red-tapism and bureaucracy to decline the party’s request to access the Confluence Stadium, Lokoja where it earlier scheduled to hold its presidential mega rally on Tuesday, December 13th, 2022.

The state party chairman who disclosed this while addressing newsmen in Lokoja on Monday described the action as “undemocratic, infantile and callous”.

According to him, the party’s presidential candidate, Peter Obi would be expected in the state on Tuesday, in continuation of his robust interface with the people.

Ahmed explained that the party had written several letters to the Kogi State Government requesting approval for the use of the stadium, only to be turned down at the twilight of the candidate’s visit.

He however assured that despite the frustration from the state government, the party remains resolute to ensure that the campaign holds as planned.

In addition, he insisted that the Labour Party is out to salvage the people from the shackles of poverty and maladministration of the present APC government.

While urging supporters of the party not to be deterred by the recent development, Ahmed lamented the massive destruction of the Labour Party’s billboards by thugs suspected to be loyal to the ruling APC in Kogi State.

Explaining further, Ahmed said: “If they had denied them the opportunity of using that stadium to campaign, I am not sure they would be in office today.

The truth is that some people put up characters that are strange. You go to so many states, you will find campaign billboards and posters. In Kogi State, there is a law, just for you to erect a campaign billboard, you must pay heavily.

“The reason the government put up these policies is to ensure that credible candidates do not win elections, and that will not work. The people are tired of the bad leadership of the All Progressive Congress (APC) in Kogi State and Nigeria in general.

So denying people the ability to use facilities is not the way out. The people will surely vote for candidates that are credible.

“Nobody has a monopoly on violence. We are Obidients. No matter what happens, the campaign will be held tomorrow.
Even though it is inside the forest. Money has never been the problem.

They made several efforts to discourage us. They even tripled the stadium money just to frustrate us from using the facilities. They are doing this deliberately at the eleventh hour so that the campaign will not hold. The people in charge of the stadium said the order came from the top for us not to have access to use the stadium.”

The LP chairman, however, debunked media reports that there is a faction in the Labour Party, adding that they are becoming stronger on a daily basis to take over leadership in Nigeria.

He said: “Mischief makers are scared of the rising political profile of the Labour Party in Kogi State, so they are eager to see how they can divide the party. We also know that there are people who are paid by the incumbent.”

“People who have ruled this state and ruined it. people who for so many years have not been paying salaries; even when they try to pay, they will pay it in percentages; people who have also made up their minds that the state should go into retrogression, instead of progress. They already know that the people will reject them at the poll, all that is paramount to them is to cause disunity in the party,” he added.

Previous PostJAF Meets With Audu/Faleke Political Family, Plots Tinubu's Victory in Kogi Next Post2023: 'We Have Been Left Behind, It's Time To Change Our Story', Natasha Charge Ganaja Residents