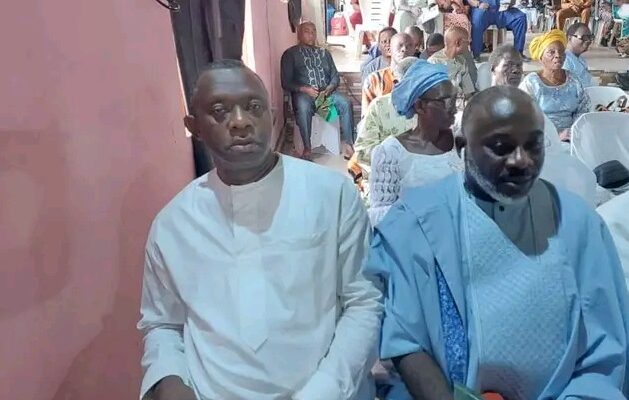 The colourism of dialectical brandishing on Yagba Agenda can not fly in the forthcoming senatorial elections in Kogi West.

By the grace of God Almighty, the election would be decided and won based on pedigree and performance of the two leading contenders from the ruling All Progressive Congress (APC) and the people’s Democratic party (PDP).

The Kogi West Senatorial District elections would be better for all, if both candidates are carefully x-rayed and examine on their individual personalities.

The two leading candidates, Hon. Tee Jay Yusuf and Hon. Sunday Karimi are two separate and distinct personalities and this has given rise to a decent and well informed public perception and opinions on their lifestyles, characters, and antecedents.

The personalities treat of the two of them is going to be considered as key elements for deciding the outcome of the election.

Without been economical with the truth, Hon Tee Jay Yusuf stands out tall in terms of human relations, human capital development as well as delivery on the desires and Aspirations of the electorates far more than Hon Sunday Karimi.

Based on available records, Tee Jay Yusuf has touched many lives of the electorates positively and in diverse ways. Reasons why the people are saying that the coming elections would be a good time to reciprocate his kindness and gentle nature.

Though the two candidates have had the rare opportunity to represent their various federal constituencies at one point or the other in the house of representatives chamber, their performance at that period speaks volumes and their results are evidence that are still on ground for the electorates to judge.

In equitable comparism of constituency projects, no House of Representatives member in the entire Okun land can beat the record of Tee Jay Yusuf.

Tee Jay Yusuf is a passionate and committed leader with high level of delivery when talking about constituency projects in Kabba/Bunu Ijumu Federal Constituency.

His records has become the benchmark of assessments for other house of representatives members from western senatorial district of the state.

Today, Tee Jay Yusuf is a third term house of representatives member, which is the first of its kind in the our district and this is based on no other reason than his record of achievements.

Asides all the outstanding performances, one major attribute working in favour of TeeJay Yusuf is humility. He is so humble like a dove and his human relations is top-notch, a gentle man to the core.

A lot of our electorates are endeared to him chiefly because of his humility and kindheartedness.

On the other hand, Hon Sunday Karimi is a direct opposite of Tee Jay Yusuf just as their political parties differs so is their characters and human relations acumen.

Quite a lot of electorate, especially those from Yagba Federal constituency, are deeply concerned and afraid of having Sunday Karimi as their Senator because they know that his arrogant and egocentric behavior will not allow him to perform in accordance to the desires of the electorate.

Most annoying is the fact that Karimi has so much entrusted most of his responsibilities as a party candidate to his so called Chief of Staff, Sanjo Orebiyi a man with low pedigree and undesirable capacity.

To many electorates in Kogi West Sanjo Orebiyi is a red flag as far as the senatorial elections in the district is concerned.

Generally speaking, lots and lots of the people are highly disturbed by the fact that the said chief of staff is a man that can not be trusted with reputable responsibilities. His reputation stinks like a dead and rotten animal. How comes Sanjo is the same person whom Karimi can be going around with? An adage says “show me your friend and I will tell who you are”.

Meanwhile, most of the electorate have become so comfortable with Tee Jay Yusuf because he does not give room for bottle necks in both access and discharge of responsibilities. He is a man that can be reached, accessed and contacted without any middle man.

However, it is already a known fact that Mr Sunday Karimi had created a noticeable gap between himself and the electorate whom he is seeking to represent.

Karimi hardly can relate with the people except through his ally, Sanjo.

This is a worrisome development that is making most of people to wonder how far this gap will continue to widen before the elections because as the campaign processes progresses the people are finding it increasingly difficult to talk to, access and talk to Karimi on their expectations.

Thankfully, Hon Tee Jay Yusuf has made himself a good friend of the people through his constant and consistent interactions and engagement with the electorates.

TeeJay Yusuf is really enjoying the sympathy of the people for being a vibrant and consistent opposition leader speaking on behalf of the people to the party in power and making himself available as voice of the voiceless ever since his advent into national political space in 2011.

Hon Tee Jay Yusuf has remained a strong and steadfast pillar of the PDP without jumping ship even in the face of serious battle against the opposition in Kogi State.

Back in the days of Governor Yahaya Bello oppressive and cohesive leadership in the state, Tee Jay Yusuf stood out as a lone voice of the people. His dogged commitments and loyalty to his party the PDP is highly appreciated by the people.

But same can not be said about Sunday Karimi who out of desperation for the Senate seat betrayed the people’s hope. Overnight, he joined the APC Dracula’s and oppressive rules in the state just because of his desire to clinch the APC Senate ticket for himself.

Therefore, the 2023 election would surely provide an ample opportunity for the people of Kogi West to handsomely reward Hon Tee Jay Yusuf for standing up for them and for standing by them during the heat of APC oppression in the State.