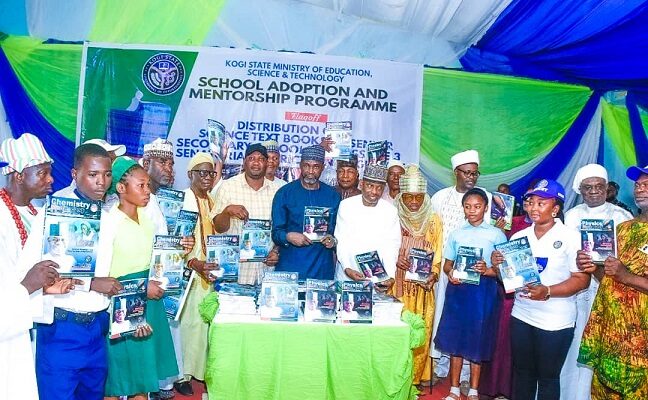 Governor Yahaya Bello of Kogi State, on Friday, inaugurated the distribution of 11, 000 free textbooks to to all Senior Secondary Secondary (SSS 2) students in public schools across the three senatorial districts state.

The donation of the Chemistry and Physics textbooks was sponsored by Alh. Ahmad Usman Ododo, the Kogi Auditor General of Local Government in support of the State Government’s School Adoption and Mentorship Programme.

Speaking at the flag-off ceremony at Abdulaziz Atta Memorial College, Okene, the governor commended the donor for the gesture in supporting education in the state.

Bello, who was represented by the State’s Commissioner for Education, Science and Technology, Hon. Wemi Jones, said his administration had given topmost priority to education especially Science Technology Engineering and Mathematics (STEM).

The governor emphasised that his commitment to revamping education sector in the state necessitated the 30 per cent allocation to education in the 2022 budget beyond the UNESCO benchmark of 26 per cent.

This, he said had reflected in the execution of massive education infrastructure projects as well as the ongoing recruitment of qualified secondary school teachers across the state.

Bello said that aside building school infrastructures, the government was committed to equipping the schools with well qualified teachers.

He explained that the teachers’ recruitment had reached the final stage after the aptitude tests and the oral interviews were concluded, saying the final list was waiting for final approvals.

He added that the state had enacted education law which empowered the ministry to sanction any person or group who tried to jeopardise government’s efforts in revamping education in the state.

He emphasised that the state government had shown sufficient commitment, hence the need for individuals and organisations to support government’s efforts through its School Adoption and Mentorship Programme.

He, therefore commended the donor, Ahmad Ododo for providing 11,000 Physics and Chemistry textbooks to public schools in the state, describing it ”as the biggest intervention by individual in the sector so far”.

He said after the distribution at Kogi Central, the textbooks would subsequently be distributed to schools in Kogi West and East senatorial districts.

He further disclosed that another Kogi citizen has promised to make provision for mathematics textbooks for the students.

He urged all the political appointees, well meaning individuals and organisations to embrace the state’s school adoption and mentorship programme.

He, however cautioned schools’ principals and teachers against commercialising the textbooks, saying it was not for sale but to be given to students free of charge.

He assured that the ministry had put mechanisms in place to monitor the distribution of the textbooks, warning that erring individuals would be sanctioned.

The governor advised the students to justify the donor’s effort by making judicious use of the textbooks.

Earlier, Dr Elizabeth Animoku, the Director, Planning, Research and Statistics (PRS), commended the commissioner for his achievement in education sector since he assumed office.

She said the textbooks had been thoroughly reviewed by the ministry through the Quality Assurance department, and were certified suitable for students’ use.

NAN reports that many dignitaries, royal fathers, school alumni and relevant education stakeholders were in attendance at the occasion.

In their goodwill messages, the Chairman of Okene Local Government, Mr Abdulrasak Mohammad; the Ohi of Adavi, HRH Alh. Muhammad Bello, commended the donor for the gesture and the state for the initiative.

Spread the love
Tweet
Previous Post2023 Kogi Gov'ship: Okun Development Initiative Dissociates Itself From '16-16-16' Agitation Next PostKogi State and China Have So Much in Common - Envoy