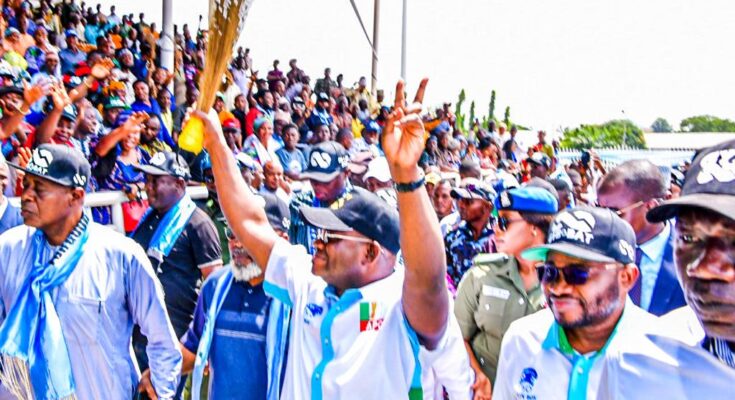 In a statement signed by the Director of Media and Publicity of the State APC Campaign Council, Hon. Kingsley Fanwo, the Council said though the party’s agenda is to win well, a new record will be set with an unprecedented margin.

“Our Governor and the leader of the party in the state, alongside other leaders of the party have been meeting with critical stakeholders within and outside the party to ensure we set an unprecedented record of victory.

“What we are doing now is activating our lawful winning strategies.

Since 2016 under the leadership of Alh. Yahaya Bello, the party has become a fortress in Kogi State, winning virtually all elections.

“In 2019, we delivered massively for President Muhammadu Buhari. We also won all the Senatorial Seats and seven of the nine House of Representatives seats, before we lost one of the seats at the tribunal.

“It is on record that for the first time in the political history of Kogi State, we have a one-party House of Assembly, as our party won all the 25 available seats.

“In November 2019, we won both the Governorship Poll and the re-run election for Kogi West senatorial seat. So when the oppositions embark on blistering propaganda and cheap blackmail, it is understandable. They have received enough defeats to condition them into a team of wailing losers.

“In 2023, GYB will show why he remains the political tactician that is trusted by the Kogi people”, he said.

The Campaign Council urged all political leaders and members to continue to campaign peacefully as the candidates of the party are capable of winning in a free and fair atmosphere.

“Our Presidential Candidate, Asiwaju Bola Ahmed Tinubu has a track record of excellence in private and public sector. Since the opposition couldn’t debunk that inalienable fact, they have resorted to character assassination which has fallen like a pack of cards.

He will win Kogi State convincingly, as well as all of our Senatorial, House of Representatives and House of Assembly candidates who are busy campaigning hard throughout the state.

“It is a thing of joy that the State Government has promised to ensure Kogi remains peaceful during the elections; the state security architecture will make it impossible for desperate politicians to import violence into the state.

“We will campaign on the strength of what we have been able to achieve and the hope for a stronger and better Nigeria”, he assured.

The Director General made this known while inaugurating the Council at Anyigba, Saturday.