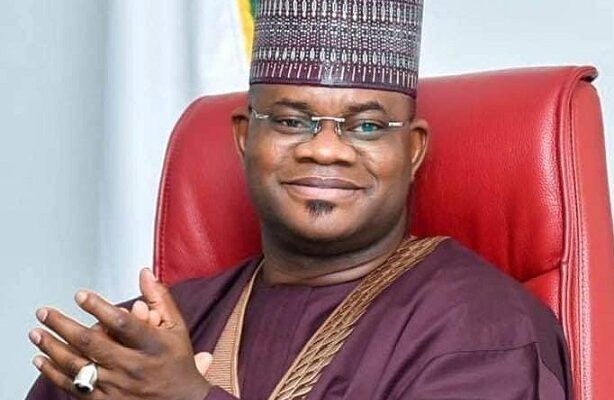 2023: First Female Vice President Can Emerge Through Me – Yahaya Bello

Gov. Yahaya Bello of Kogi says he will nominate the first female vice president if emerged the presidential candidate for the All Progressives Congress (APC) in 2023 General Elections.

Bello, who said this at the “Second Annual GYB Seminar for Nigeria’s Political and Crime Correspondents” in Abuja, said he would give consideration to women if given approval to choose his running mate.

The governor said that he was committed to running an inclusive government carrying women, youths and Persons With Disabilities along as he did in Kogi, ensuring that no one was left behind.

“If given the opportunity, if my political party will give me the opportunity and free hand to choose who will run with me, come 2023, surely I will not leave the constituency of my mother, which is women.

“I assure you that if ever I will be given that opportunity, I will wish to have the first female vice president from 2023,” he said

Bello said that his administration, if given the mandate to lead Nigeria, would focus on empowerment and capacity building to foster the smooth running of the Nigerian economy.

He said that his administration as governor of Kogi raised 2,000 millionaires, stressing that if elected president, he would lift 100 million Nigerians out of poverty.

“In my presidential declaration speech, I promised that I would build on what Mr President promised of ensuring that nothing less than 100 million Nigerians are pulled out of poverty by the year 2030.

“The question will be, ‘what have you done in Kogi State, how many millionaires have you made?’

“I will tell you that within the limit of our resources, coupled with various challenges and demands on our resources we have been able to make nothing less than 2,000 millionaires in Kogi State, within this short period.

“Our government created an enabling environment that if you have N1 million you should be able to turn it around and multiply it.”

He said that his achievement so far would make him win the party’s ticket irrespective of the method adopted by the party to select the candidate.

According to him, his party will still produce the next president of Nigeria, APC is very strategic.

“Forget about zoning or no zoning; it is about who is a leader and will put the party together.

“The party knows the body language of the nation. APC knows the clamour for a young President who will build on the achievements of President Muhammadu Buhari.

“The party knows who will turn the fortunes of this country around.

“If consensus is going to be the option, so be it. Whether it’s direct or indirect primary, Yahaya Bello is the man to beat.

“We must jettison sentiments, it is time to bridge the religious gap and cement the relationship,” he said.

Bello said that he was the man that would champion a new Nigeria where sentiments would no longer matter.

“We want to make sure that the language you speak, your religion and where you come from does not matter again in our presidency,” he said.