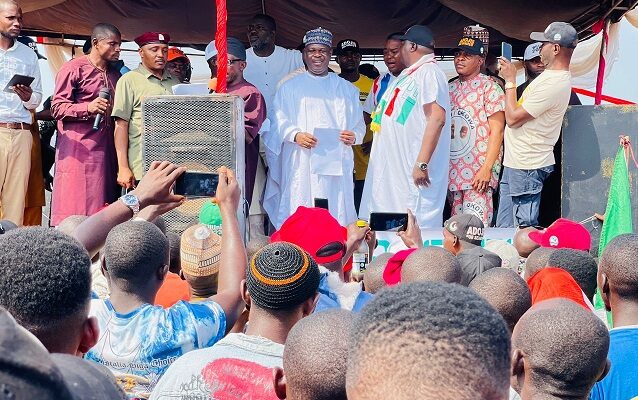 The Peoples Democratic Party (PDP) in Dekina Local Government Area of Kogi state on Saturday inaugurated its campaign council for the 2023 general elections, with a call on stakeholders and members to synergize to guarantee a landslide victory for the party in the area.

Barr, Haruna charged them to approach the coming election with vigor and ensure victory for all candidates.

He said that the council’s mandate was to deliver all the PDP candidates in the 2023 elections and charged all party faithful to support the team to achieve results.

“Let me congratulate you for being selected to lead this onerous task. You were not chosen by accident, you were selected because of your track records of excellent service to the party.

“If we were having 60 per cent in previous elections, we need to score 99 per cent now because to whom much is given much is expected,” he said.

The former PDP gubernatorial candidate, Engr Musa Wada who also stormed Dekina town for the meeting, said the party had all it takes to win elections in the local government and urged party members to remain dedicated to the course for the party’s victory.

Wada warned against political thuggery and vowed to stand by the local campaign council to ensure victory for the party.

He called for massive support for the presidential, senate, house of representative and State Assembly candidates.

“Let me assure you that by the grace of God, we will do everything possible to ensure victory for all the candidates of our great party,” Wada said

In a remark, the House of Representative candidate of the party for Dekina/Bassa federal constituency, Comrade Usman Okai Austin, thanked the party for the choice of members of the council and urged them to work assiduously to root APC out at all levels in the country.

He deplored the state of hardship in the country and urged members of the party to strive hard and contribute their quota as the party moved to “rescue, reset and rebuild” the country.

Others who spoke at the ceremony include Hon. Godwin Meliga, the House of Assembly candidate for Okura constituency, who appealed to members for uniform votes for all the candidates.

Hon. Andrew Egbunu sought massive turnout on the election day and tasked members on the need for vote protection.