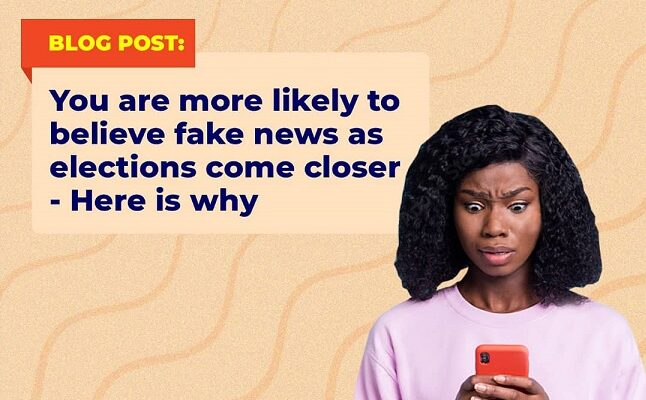 When was the last time you saw a piece of news and you later saw an apology or rejoinder from the same or a different media house labeling the same piece as fake? The number is probably more than once. Fake news is a thing, more so during the electioneering process. It is often said that war is a game of deception, no doubt, some politicians see elections and the electioneering process as war too. This is why they use all means possible to get the results that they seek.

It is even more complicated that the electioneering process in a lot of countries is far from standardized.There are a lot of name-callings, with the entire campaign often hinged on negativity and bad blood rather than facing the issues squarely. Whileethics and morality might be the reason why some actors steer clear of such drastic acts, there is another that transcends all the aforementioned and it is fake news.

Fake news is not just untruths and falsehoods, it also carries the full weight of the intent with which it is deployed – to misconstrue the public and to call falsehood facts. The impact of fake news, disinformation and other forms of untruths on elections around the world continue to be studied and deliberated on.

What we do not consider is what if the elections are not that close and fake news just helps the perceived frontrunner to run all the way ahead? That is why it is essential to look at the root causes of why fake news campaigns flourish during electioneering season:

The political atmosphere is charged with emotions during political seasons

During political season, the atmosphere is charged and some political thugs and minions are looking for reasons to unleash violence on members of the opposition party and those who do not agree with their point of view or bias. Fake news just helps to turn these aspirations into reality. The effect of fake news is furtherheightened within the political atmosphere.

In the absence of verified records, fake news flourishes

One of the many reasons why fake news keeps thriving is the stark fact that in a lot of developing nations, it is quite a thankless job to keep records. When these records are kept, efforts are being made to keep these records away from the public. In the absence of these records, fake news flourishes. From deep fakes and articles put together by ghost social media users and troll accounts with large followings, fake news can become catastrophic fast.

One of the favorite means of getting information today is social media. The visibility of the candidate alone on the different social media platforms and the perception they carry on the platform can play a critical role in deciding the election result. Simple name recognition can drive the entire election result. In a way, even exaggerated truths can get on social media and can be misconstrued into fake news by ardent followers and an unsuspecting fan base of political parties.

Low level of literacy amidst the populace

It is not just about formal education, there is also the literacy level of double checking and filtering information. In any culture where fact-checking and double-checking is not the norm, it is easy for fake news to be taken wholesale. When next you come across news, before retweeting, check. Before sharing, read. If something doesn’t add up, then, there is likely something hidden. Learn how to reverse search images, these are simple skills that can help you nip fake news in its bud.

Fake news is not just a one-off thing that affects everyone, it is dividing information that is sown by some elements and continues to widen the gap of an already divided issue. If not handled in time, it can rip people apart and tear nations into shreds. It must be watched, it must be curtailed.

This article was written and prepared by the Community Initiatives to Promote Peace project, CIPP.

CIPP is a USAID-funded project that aims to promote peaceful coexistence and collaboration in Nigeria by mitigating violent conflict in at-risk communities in Nigeria.

The social media campaign component of the project is all about enlightening Nigerians on the dangers of spreading fake news, rumors, and hate speech on social media, as it contributes to the violent conflict and insecurity that affects us all.

The social media campaign is currently in its second season, and this year, we are solely focused on promoting positive election behaviors ahead of the 2023 general elections.