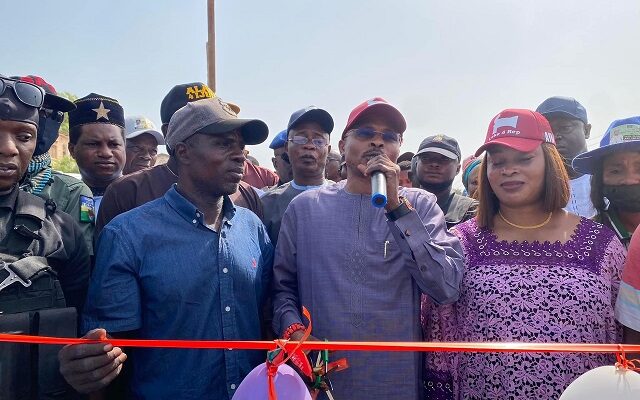 The representative of Yagba Federal Constituency (ADC), Rep. Leke Abejide has received commendations from all and sundry for every of his manifesting good works as the people’s representative.

He received the commendations yesterday (tuesday) in Egbe, Yagba West Local Government during the commissioning of the Ajaforunti – Oja Egbe Road he reconstructed.

A chieftain of the African Democratic Congress (ADC) and former aspirant for Kogi State House of Assembly (Mopamuro Constituency), Hon. Julius Olushola Abel-Ontop amongst others passed a special commendation to Rep. Abejide.

He described Abejide as a worthy representative of the people that remains undistracted in his developmental strides.

‘Leke Abejide is a worthy representative of the people, he never gets weary of delivering true developmental dividends to Yagba, Okun and Kogi people which he has been doing before he was elected in 2019.

‘Elder Leke Abejide has touched virtually all sectors to ensure the welfare, growth and development of the people and the communities.

‘He remains undistracted despite the efforts of his opponents, in fact he responds to their propaganda by continuous performances.

Youths, men, women, traditional chiefs and others appreciate Abejide, assures him for their unalloyed support to re-elect him in the 2023 general elections.