Home News Who is Afraid of Olayemi Akinwumi? 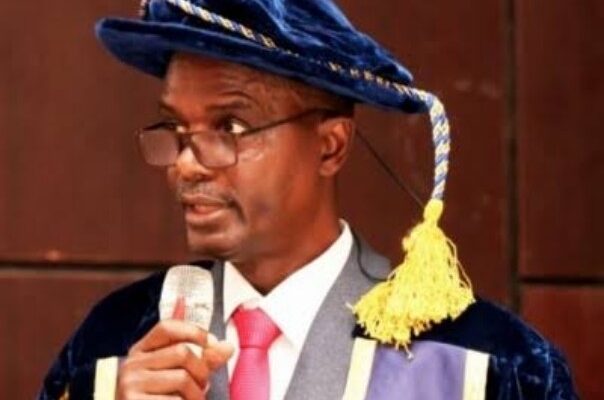 Who is Afraid of Olayemi Akinwumi?

Back in December 2020, Chris Adighije, a former senator representing Abia central, who is the present chairman of the governing board of the Federal University Lokoja, (FUL), sat on a meeting of the board to appoint a new vice chancellor, (VC), for the institution. It was a very rigorous process, because a whopping 81 candidates applied for the job. The list was pruned down to a more manageable 20, in an attempt to sift the proverbial chaff, from the wheat. At the end of the exercise, Yemi Akinwumi, a seasoned professor of history and international studies, was unanimously selected and appointed VC of the fledgling institution.

Adighije noted at the end of the exercise, that the selection process was extremely transparent, consistent with due process,
free and fair. According to him, “the selection board made up of two external members of the Council and two internal members from the Senate of the institution, (with himself as chairman), conducted interviews for 14 applicants who appeared before the board. Professor Olayemi Durotimi Akinwumi, who is currently the Deputy Vice Chancellor of Nasarawa State University, came first; Professor Akintayo Emmanuel Temitope from Ekiti State, came second, while Professor Krekere Tawari Fufeye from Bayelsa, came third.”

The chairman of the FUL governing board, described the process as “seamless and peaceful” and one which had produced the third chief executive of the institution, since it was established in 2011. Akinwumi succeeded Professor Angela Freeman Miri, who completed her five year term in office, Monday February 15, 2021. He was hailed as the first Kogi State indigene to be appointed to the position, which ordinarily, should be a source of delight to the people of the state.

Akinwumi came very prepared for the top job of the FUL. I should know because I have diligently followed his academic and professional trajectory, over the past four decades. He is my longstanding classmate, close friend and bosom brother so to speak. I shared the same faculty, hostel and social clubs with him at the University of Ilorin, (Unilorin), where we both studied. He read History, while I studied English, both of us graduating in 1985. We both returned to our alma mater in 1987, for our masters degrees and lived in the same hostel.

We graduated together in 1989, and he was promptly engaged as a lecturer by his department, to make his knowledge and experience available to younger students. He obtained his doctorate on the job, rising to the rank of senior lecturer (which Americans describe as assistant professor), in 1996. For five years, between 1999 and 2004, Akinwumi was at the Institut for Ethnologie, Freie Universitat, Berlin, Germany, as visiting professor. My wife and I were his guests during his stint in Germany, and Akinwumi practically set aside everything he was doing, just to make us comfortable.

On his return to Nigeria in 2004, Akinwumi was courted by many universities. He settled for the Nasarawa State University, Keffi, (NSUK), where the renowned scholar, educationist and administrator, Professor Adamu Baikie, was pioneering the development of the new institution, in his capacity as its premiere VC. Akinwumi straddled every possible academic and administrative position in the university, including head of department; dean of faculty; dean of postgraduate studies; director of the institute of governance and development studies; chairman of the committee of deans, and deputy vice chancellor, (DVC), respectively. He aggregated tremendous goodwill for the accelerated development of the institution, courtesy of his extensive contacts and linkages, across the world.

A very highly decorated academic, Akinwumi’s perspiration and commitment to scholarship, has earned him several awards, notably the: Ali Mazrui Award for Academic Excellence, in Kenya; the Stellenbosch Institute of Advanced Studies Award, in South Africa; and the prestigious German Alexander von Humboldt Award, among others. He has also received the Nord-Sud-Kooperation Award of the University of Zurich, Switzerland; the European Research Award, University College, London; the Institute of Commonwealth Studies Award, also in the University of London and the German Deutscher Akademischer Austauschdienst, DAAD Award, in Germany.

Akinwumi, who turned 58, January 20, 2022, is the immediate past president of the Historical Society of Nigeria, and a distinguished fellow of the body. He is also a fellow of the Nigerian Academy of Letters, (FNAL), among others. He is credited with nearly a century of publications in local and international journals, books and festschrifts. He has also authored several books, notably: Conflict and Crises in Nigeria: A Political History since 1960, and Colonial Contest for the Nigerian Region: A History of the German Participation. He has attended conferences in no less than 30 countries across the world.

Since he assumed office February 15, 2021, however, Akinwumi has been the butt of sustained misrepresentation, unrelenting character assassination, serial media bullying, continuing tar-brushing and very malicious attacks. Every now and again, unattributed reports are hoisted on terrestrial mediums, spewing all manner of concocted tales and fables. When Akinwumi is not being falsely accused of increasing school fees, he is targeted for the award of phantom contracts to his cronies. When he is not being savaged for outsourcing the planning of FUL’s convocation ceremony, barbs are fired at him, for empowering his aides, to the detriment of other members of staff. A few weeks back, one of these mushrooming online publications, simulated a query issued by the governing council, to Akinwumi, at a time when the same council, publicly passed a vote of confidence on his leadership of the institution.

Days back, another report accused Akinwumi of drunkenness and cavorting with females under his watch! Fictional addresses in Lokoja were cited as the regular rendezvous of the renowned scholar, among similar balderdash. Those of us who know Akinwumi, know for a fact, that he is a teetotaller. Yes, he entertains his guests with their desired beverages, but he cannot be found with anything beyond water or non-alcoholic drinks. Womanising has never been his attribute in the almost 40 years I have known him, either, let alone, to be found feeding on the proverbial vegetation beneath his belly. The Yemi Akinwumi we know, is a career bookworm, a virtual introvert. His humility is unequalled, an attribute which breeds misconception by those just getting to know him. Even as VC, Akinwumi has been photographed distributing question papers to students in the examination hall and staying through, to supervise the process.

From all indications, Akinwumi’s travails emanate from the very institution he superintends over. Yes, as the Yoruba proverb says, the pest which is afflicting the vegetable plant, is resident inside the plant itself. Some of his co-contestants for the position of VC, a little over a year ago, are personnel of the FUL. There is this sense of entitlement by some academics who come from so-called numerically superior ethnicities and cultures in Kogi State who are within the FUL system. They believe they reserve the right of first refusal, for plum positions, in institutions and establishments, domiciled in Kogi State.

The same mentality, tinctures the worldview of these people, even in the larger sociopolitics of Kogi State. I remember for instance, a longserving governor of the state from Kogi east, addressing leaders from my local government area back in 2011, and telling us his “people said he could not hand the governorship ticket to any other ethnicity, except theirs, failing which, he said, they will kill him!” As though the fellow was elected and enthroned, strictly and singularly on the strength of the tally of votes of his kinsmen, without the support of the electorate from other local government areas, federal constituencies and senatorial zones. And this is a state peopled by diverse tongues and disparate traditions, who should have equitable stakes in the affairs and commonwealth of the geopolity, for crying out loud.

It is on record for instance, that a group chaired by one Abdul Amade, on behalf of a certain sociocultural group in Kogi State, on December 11, 2020, petitioned the education minister, Adamu Adamu, calling for the cancellation of the selection process, which produced Akinwumi. This was because the exercise did not produce a VC from the preferred locale of the said group. Yet, worthy of note is that since the establishment of the state-owned Abubakar Audu University, Anyigba, for instance, only intellectuals from Kogi east zone monopolized the headship of the institution until the appointment of the incumbent Mariyetu Ohunene Tenuche, by the Yahaya Bello administration.

As one of his primary tasks upon his assumption of duty Monday February 15, 2021, Akinwumi moved to appease disgruntled individuals, groups and tendencies, which were still belly-aching about their loss in the VC contest. He set the tone of a new verve, novel gusto and urgency in the administration of FUL, encouraging professors within the system who were due, but yet to deliver their inaugural lectures, to promptly do so. He rehabilitated structures in the new and permanent site of the university, to accelerate the relocation of the university from its temporary site at the centre of Lokoja the state capital, to the permanent site on the Okene-Lokoja-Abuja highway.

Akinwumi set up a college of medicine for the university just months into his administration, even as all the courses in FUL, have been re-accredited by the National Universities Commission, (NUC). The university has been rated the best of the 12 created under the dispensation of former president Goodluck Jonathan in 2011. It also occupies the sixth position of all the federal universities in the country.

Akinwumi’s application to duty and successes within just one year of his five-year term in office, continue to astound his adversaries. Unable to pick holes in his professional and official brief, anonymous characters whose minds brim with bile and hatred, have resorted to sundry distractions and vindictive pursuits. Simply put, they are afraid of Akinwumi’s towering profile and diminished by his unbelievable triumphs thus far. He will yet build FUL into an institution of international acclaim, so faceless dissenters will do better to reconcile themselves with reality and join hands with Akinwumi on his path to making history.

– Tunde Olusunle, poet, journalist, author and writer is a Member of the Nigerian Guild of Editors, (NGE).